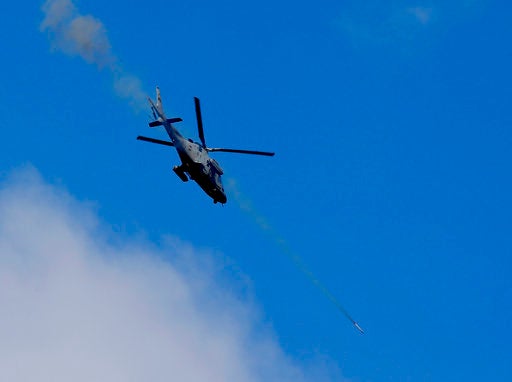 A helicopter gunship fires a rocket at Muslim militant positions in the continuing assaults to retake control of some areas of Marawi City Sunday. AP/Bullit Marquez

The military on Sunday said it will continue “precision” air strikes and artillery fire at specific locations to expedite clearing operations in Marawi City.

Bombs were dropped by military air assets to flush out the remaining terrorists on the sixth day of fighting.

As of Sunday, 61 terrorists were killed in the ongoing fighting, which started from a botched raid by government forces on Abu Sayyaf leader Isnilon Hapilon. Padilla said that there were 42 body counts on the slain terrorists, while 19 were based on eyewitness accounts.

The military earlier said that some of the fatalities from the terrorists’ side were foreigners — some of them were Indonesians, Malaysians and Singaporeans.

On the government side, 15 were killed (11 soldiers, 4 policemen) as of Saturday, while the injured state forces were at 39.

Padilla also said that 19 civilians were killed by the terrorists, with eight bodies recovered outside the Marawi State University.

“We are still validating other reports of atrocities,” Padilla said.

Troops on the ground have also recovered 28 high-powered firearms in the last 24 hours of military operations alone.

Government forces were able to rescue 124 trapped civilians since the fighting started.

“Priority of ongoing military action is likewise aimed at aiding residents who are still trapped in the city’s interiors,” Padilla said.

The military also asked the full cooperation of citizens in the affected areas.

“Our forces are working overtime to hasten the restoration of the rule of law and Marawi’s return to normalcy… We count on everyone to unite as one nation and do their patriotic duty for the restoration of peace in our country,” Padilla said./ac