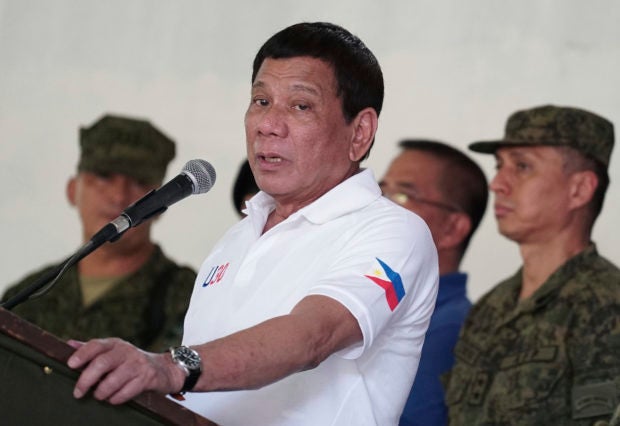 In this May 27, 2017 photo provided by the Presidential Communications Operations Office, Philippine President Rodrigo Duterte delivers his speech as he visits a military camp in Jolo, Sulu province, Mindanao, southern Philippines. AP

President Rodrigo Duterte has said he will ignore the Supreme Court and congress as he enforces martial law across the southern third of the country, even though the constitution gives them oversight.

Duterte on Tuesday imposed martial law in the Mindanao region, home to 20 million people, following deadly clashes in a mostly Muslim-populated city involving militants he said were trying to establish a caliphate for the Islamic State group.

“Until the police and the armed forces say the Philippines is safe, this martial law will continue. I will not listen to others. The Supreme Court, Congress, they are not here,” Duterte told soldiers on Saturday.

“Are they the ones dying and losing blood, bleeding, hemorrhaging because there is no help, no reinforcement? It’s not them.”

The 1987 Constitution imposes limits on martial law to prevent a repeat of the abuses carried out under the regime of dictator Ferdinand Marcos, who was deposed by a famous “People Power” revolution the previous year.

The Constitution requires Congress to approve a president’s declaration of martial law, and limits military rule for 60 days. If a president wants to extend it, he or she must again get congressional endorsement.

The Supreme Court can also rule on martial law’s legality.

“The Supreme Court will say they will examine into the factual (basis). Why I don’t know. They are not soldiers. They do not know what is happening on the ground,” Duterte said Saturday on Jolo, a southern island that is under martial law.

A day after declaring martial law, Duterte described the nine years of military rule under Marcos as “very good”, and said his would be similar.

Duterte also told soldiers on Friday they would be allowed to conduct searches and arrests without warrants.

“During martial law, your commanders, you, you can arrest any person, search any house. There is no more warrant needed,” Duterte told troops on Friday.

“Warrants of arrest or search warrants should be issued,” the statement from the government’s information agency said.

“No person may be arrested and detained without orders coming from these civil courts.”

Duterte has overwhelming support in Congress, which is this week widely expected to endorse his initial declaration of martial law.