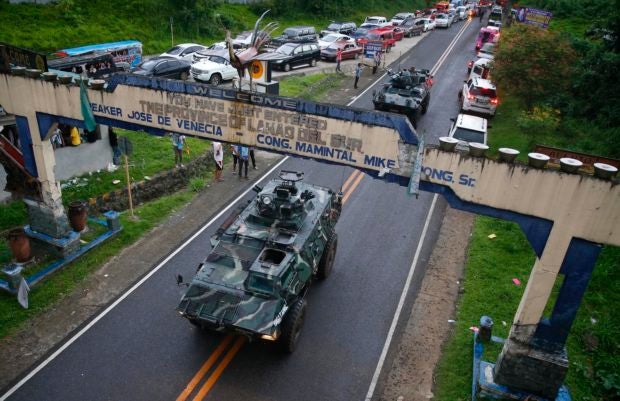 Armored Personnel Carriers make their way through a queue of vehicles with fleeing residents that stretches for miles (kilometers) as Muslim militants lay siege in Marawi city in southern Philippines for the third day Thursday, May 25, 2017. The exodus of thousands of residents has continued amid continuing gun battle between Government forces and Muslim militants occupying several buildings and houses in the city where they hoisted IS style black flags.(AP Photo/Bullit Marquez)

DAVAO CITY – Representative Antonio Floirendo has called on other members of Congress to “throw their support” to President Duterte’s relentless fight against the Isis-inspired terrorists.

Floirendo, in a statement, said he stands firm behind the President’s decision to impose martial law in Mindanao in order to stop the rebellion and growing threat of terrorism in the region.

“As a Mindanaoan, I believe that President’s Duterte’s leadership is what is needed to bring peace and security in the region,” he said.

“Let us also rally behind our troops as they fight terrorists whose only aim is to advance their twisted ideology that aims to destroy the very fabric of our way of life as a nation and as a people,” he added. JE/rga