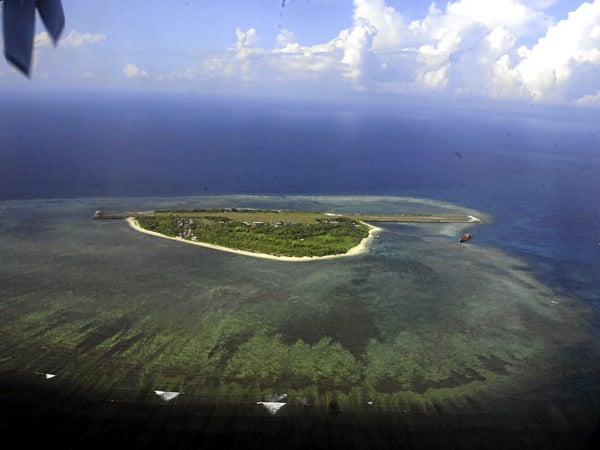 BEIJING –Chinese frigates were deployed off the Spratly Islands to warn a US Navy warship to leave the disputed waters located within the South China Sea area on Thursday.

Beijing strongly condemned Washington over the US incursion of the Nansha Islands (Spratly Islands) without permission, and warned that such action could damage the peace and stability of the South China Sea.

Experts said that the move shows the US military wanting to remain its presence in the region for both its domestic and international goals.

The USS Dewey, a guided missile destroyer, sailed less than 12 nautical miles from the Meiji Reef (Mischief Reef) of the Nansha Islands early Thursday, the first such case under the administration of US President Donald Trump, US media reported, citing US military officials.

China deployed the guided-missile frigates Liuzhou and Luzhou to identify and warn the US ship to leave, Ren­Guoqiang, spokesman of the Ministry of Defense, said at a regular news conference. China also made solemn representations, a diplomatic protest, to the US, he said.

“Such wrong conduct of the US military will only encourage the Chinese military to further strengthen its capacity building and firmly defend our national sovereignty and security,” he said.

He said China has undisputable sovereignty over the Nansha Islands and surrounding waters. “We strongly oppose such practices of the US military, which shows off its might, promotes regional militarization and easily causes unexpected air and sea accidents.”

Ren said that a healthy and steady military relation between China and the US is in line with the common interests of the two countries, and it needs concerted efforts on both sides. “We urge the US to take concrete measures to correct the mistake and inject positive energy into the development of bilateral military relations,” he said.

Lu Kang, Foreign Ministry spokesman, said that the situation in the South China Sea is cooling down and showing positive signs of development, thanks to the joint efforts of China and ASEAN countries.

But the US action risked severely disrupting the negotiations between the stakeholders in the South China Sea, “and benefits no one,” he said.

China strongly urged the US to stop provocations and refrain from damaging the peace and stability of the region as well as Sino-US cooperation, he added.

Major General Zhang Junshe, a senior researcher at the People’s Liberation Army Naval Military Studies Research Institute, said that the excuse of “freedom of navigation” allows the US Navy to boast of its military presence in the region to achieve its domestic and international goals.

“By stirring up trouble in the South China Sea, domestically, the US military can ask the Trump administration for more resources to contain China,” he said.

“Internationally, the US military can reassure its global allies that it has not lost footing in the South China Sea, and appear tough before the upcoming Shangri-La Dialogue, where defense officials from around the world will meet in Singapore.” JPV