Nolcom: No instructions yet to augment Mindanao forces under martial law
By: Tonette Orejas - @ttorejasINQ
Inquirer Central Luzon / 09:34 AM May 26, 2017 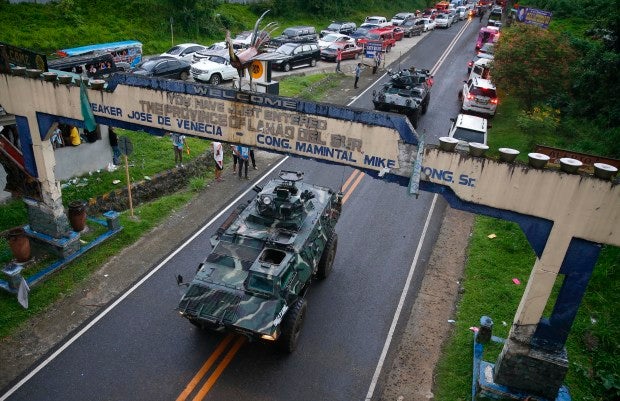 Armored Personnel Carriers make their way through a queue of vehicles, with fleeing residents that stretches for miles (kilometers) as Muslim militants lay siege in Marawi city in southern Philippines for the third day Thursday, May 25, 2017. The exodus of thousands of residents has continued amid continuing gun battle between Philippine government forces and Muslim militants occupying several buildings and houses in the city where they hoisted IS style black flags.(AP Photo/Bullit Marquez)

CITY OF SAN FERNANDO — Angeles City Mayor Edgardo Pamintuan, the president of the League of Cities of the Philippines, has expressed support for Mr. Duterte’s decision to impose martial law.

“The President’s declaration is in the best interest of the country. It is required to ensure public safety and to restore peace and order,” he said on Wednesday.

Military and police forces in northern and central Luzon have stayed put on the heels of President Duterte’s declaration of martial law in Mindanao.

“As of this time [Wednesday noon, May 24], there is no order to the Nolcom [Northern Luzon Command] to deploy or augment troops in Mindanao,” Lt. Col. Isagani Nato, Nolcom public information officer, told the Philippine Daily Inquirer.

Nolcom, a unified command of the Philippine Army, Philippine Air Force and Philippine Navy in the Ilocos, Cagayan Valley, Cordillera and Central Luzon regions, is based in Tarlac City.

“The troops there [in Mindanao] are enough to address the situation,” Nato said, referring to the reported terrorist alliance of the Maute Group and Abu Sayyaf Group.  SFM