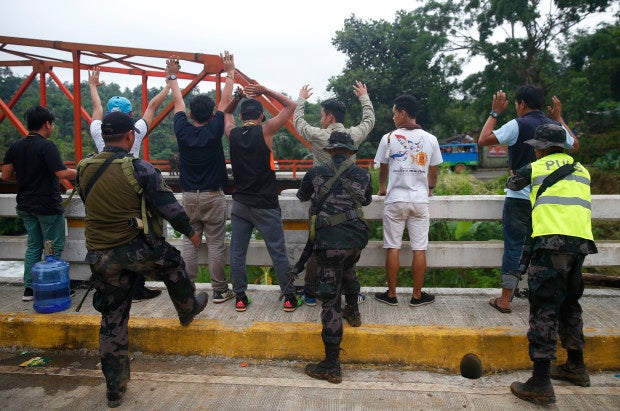 Male residents are frisked by police at a checkpoint as they leave Marawi city in southern Philippines Thursday, May 25, 2017. Army tanks packed with soldiers rolled into the southern Philippine city Thursday to try to restore control after ISIS-linked militants launched a violent siege that sent thousands of people fleeing for their lives and raised fears of extremists gaining traction in the country. AP

A total of 44 combatants have been killed in the ongoing fighting in Marawi City, the Armed Forces of the Philippines said late Thursday night.

Six soldiers were killed in fresh clashes on Thursday, bringing the death toll on soldiers to 11, according to the Western Mindanao Command.

READ: Cop killed in Marawi attack had dreams of becoming a lawyer

Meanwhile, 18 members of the Maute Group were killed in a fresh gun battle as government troops cleared two bridges heading towards Bangulo. This brings the fatalities on the terrorist groups to 31 from 13 on the previous day.

“As of this report, 31 terrorists were already neutralized and six high-powered firearms were recovered by the troops,” Brig. Gen. Rolando Bautista, commander of the Army’s 1st Infantry Division, said.

“Our troops are doing deliberate operations in the areas we believe are still occupied or infested with the terrorists’ presence,” he added.

In a news briefing earlier, the military said it had also launched “precision” air strikes to go after the remaining 30 to 40 members of the Maute Group scattered in parts of the city.

It has also deployed Army tanks, special operations forces, as well as attack helicopters, to retake the predominantly Muslim city.