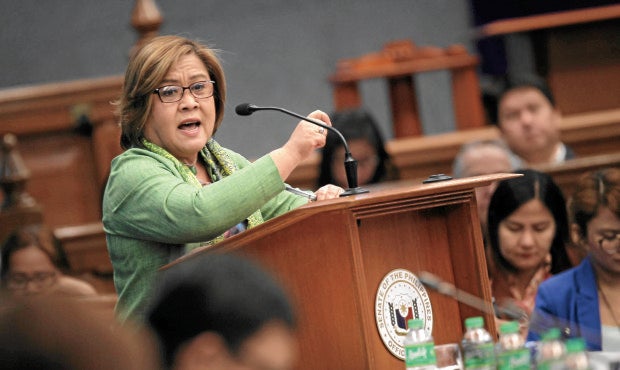 Senator Leila De Lima on Thursday lamented that her colleagues in the Senate have pretended disbelief on the allegations of self-confessed assassin and Davao City police officer Arturo Lascañas on the existence of the Davao Death Squad.

In her latest dispatch from Crame, De Lima reacted to the findings of the Senate Committee on Public Order and Illegal Drugs chaired by Senator Panfilo Lacson that found no credibility in Lascañas testimony.

This even though Lascañas corroborated the earlier testimony of another self-confessed hitman Edgar Matobato on the existence of the Davao Death Squad (DDS), De Lima said.

Matobato and Lascañas have accused President Rodrigo Duterte of forming the alleged hitman’s group DDS to eradicate criminals and drug suspects in Davao City as well as his political rivals when he was then mayor.

Lascañas retracted his earlier testimony when he dismissed Matobato’s allegations as lies.

“It is unfortunate that the Senate Committee on Public Order and Illegal Drugs chaired by Sen. Lacson has held that SPO3 Arturo Lascañas’s second testimony was not credible, in spite of the fact that it corroborates the previous allegations of Edgar Matobato,” De Lima said.

De Lima lamented that her colleagues even “scoffed” at the testimonies as “incredible” and uncorroborated.

She said her colleagues are merely feigning disbelief.

“Some of my colleagues previously scoffed at Matobato and his story for allegedly being incredible and wanting in corroboration. Now that another conscience-stricken DDS insider, in the person of Lascañas, has joined Matobato in doing a most perilous act of publicly confessing their participation in a criminal enterprise called DDS, again, my colleagues, with due respect to them, have feigned disbelief,” De Lima said.

De Lima said the committee report dismissed the self-confessed hitmen’s testimonies because of lack of official records and by applying the presumption of regularity of official acts.

But De Lima said this should not have been the case because “there is nothing official in the operations of the Davao Death Squad.”

“It is precisely because the DDS operated outside the bounds of justice system that their activities are considered criminal. Their targets were simply identified by Duterte under the pretense of administering justice and they executed them without even looking into their boss’s allegations,” De Lima said.

De Lima said it is clear that allies of the President in the Senate are bent on discrediting her witnesses, who were instead caught in “an impossible task of convincing a panel committed to misunderstanding them simply because they are accusing the President.”

“Mahirap ho talagang gisingin ang mga taong nagtutulug-tulugan lamang (It really is difficult to wake up someone who is pretending to be asleep),” De Lima said.

In the report, the Senate committee on public order and dangerous drugs chaired by Lacson found Lascañas testimony inconsistent and lacking in evidence.

The committee came up with the report after conducting only one hearing.

“The lack of credibility of both witnesses results in the lack of evidentiary value of their testimonies. Aside from the extrajudicial confession, no other piece of evidence was presented to prove the conspiracy. Therefore, their confession has no probative value,” the committee report read.

“One thing is for sure, Arturo Lascañas is not the person to prove [the DDS’s] actual existence and finally bring to justice the perpetrators of numerous unresolved crimes in Davao City or elsewhere if proven so,” it added.

De Lima is detained at the Philippine National Police Custodial Center as she faces charges of drug trade and sale at the New Bilibid Prison when she was justice secretary allegedly to raise campaign funds. She has denied the charges, calling it political persecution for being a vocal critic of the President. JE