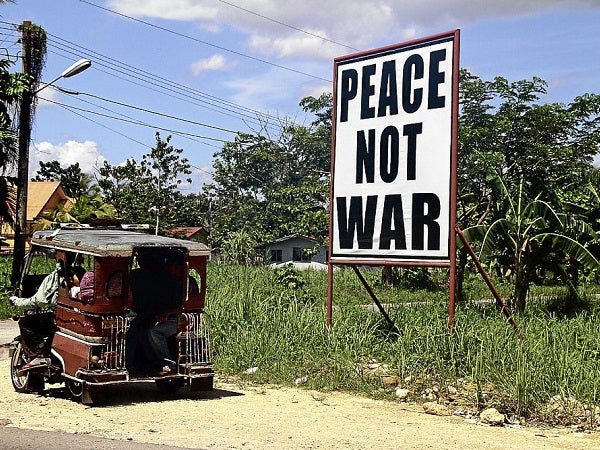 COTABATO CITY – In support of the declaration of martial law by President Duterte, the Cotabato City government has started implementing a “no ID, no entry” policy, the city mayor here said Thursday.

The decision was reached after Mayor Cynthia Guiani-Sayadi met all village officials in an emergency meeting Wednesday night following the bloody terrorist attacks by the ISIS-inspired Maute Terror Group and Abu Sayyaf.

Sayadi first directed all village chiefs to intensify visibility and to conduct checkpoints “in areas where it is necessary.”

“This is to ensure (at barangay level) that no intruders will be able to penetrate and disturb the residents,” she said in a statement.

Residents and travellers can expect tight checkpoints along entry and exit points, to be implemented by the Army-led Joint Task Force Kutawato (JTFK)

Heightened alert is also implemented in the coastal areas and communities living near riverbanks.

Sayadi said all those entering the city from north and south section of Cotabato City would have to undergo checks under the “no ID, no entry” policy,

Every motorist is required to log in at checkpoints and present valid identification cards after reports came out that some inmates of Marawi City jail were rescued by Maute Group who attacked the Islamic City.

Some of the inmates were Maute Group members who were from Cotabato City.

“In the exercise to ensure public safety, we deem it necessary that everyone going in and out of the city is well accounted for,” Sayadi said.

The mayor said residents have been advised to always bring identification cards whenever they go out of their homes.

“Children must always be accompanied by parents and those without IDs must not go around without companions. The nightly curfew for minors is also still in effect,” Sayadi in a statement said.

All residents are encouraged to immediately report to authorities any sighting of people with unfamiliar faces or those not known or living in their communities.

“There is no cause for alarm or panic but we are just implementing these strict guidelines as preventive measures to any spillover of violence. Everyone must stay vigilant and be on guard at all times,” Sayadi said.

The mayor has expressed her full support to President Duterte in his declaration of martial law in Mindanao, saying she trusts the President’s wisdom and is confident that this can prevent any terrorist attack in the future.

Seven suspects in the Sept. 1 Davao City bombing were from Cotabato City and arrested here by government operatives.  SFM/RGA