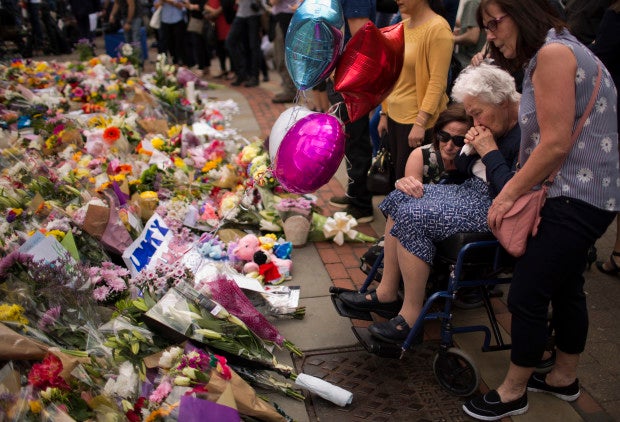 Women cry after placing flowers in a square in central Manchester, Britain, Wednesday, May 24, 2017, after the suicide attack at an Ariana Grande concert that left more than 20 people dead and many more injured, as it ended on Monday night at the Manchester Arena. AP

MANCHESTER, England— On the Manchester street they call the “Curry Mile,” there are no longer just Indian or Pakistani restaurants. Instead, in a sign of the ever-changing face of this proudly multiethnic city, a hungry diner these days can choose between Halal snacks from Beirut, kebabs from Afghanistan or garishly colored sweets from India, among many others.

Traffic jostling along the busy road and people on the sidewalks are just as varied – two young hipsters on vintage race bikes zoom past a mother in full-face veil pushing a stroller. A man of South Asian appearance purrs past in a white Rolls Royce. A block away from the road, Paulette Greig, the daughter of a Jamaican Indian and a white English woman, drinks a glass of water in the Albert Inn, a traditional English pub.

The kaleidoscope of Mancunians – as the city’s residents are known – reflects the city’s long history of welcoming migrants and, on the whole, successfully integrating them.

“Obviously, you get the odd idiot, but you get them everywhere,” Greig said.

Manchester’s race relations have been in the spotlight since suicide bomber Salman Abedi, a British citizen of Libyan descent, killed 22 people and injured dozens more on Monday night outside an Ariana Grande concert. The attack has been claimed by Islamic State, drawing attention to the city’s Muslim population. Some 80,000 Muslims live in Manchester, according to data from the 2011 census, making up nearly 16 percent of the population at the time.

Alongside many churches and a handful of Sikh temples, there are dozens of mosques dotted around the sprawling city. The large, modern Central Mosque is tucked into a leafy street in the Victoria Park neighborhood just a few blocks from the Curry Mile, and smaller establishments cater to national minorities who tend to be bonded by language.

It remains unclear how exactly Abedi became radicalized. Libyan anti-terror forces arrested his father in Tripoli on Wednesday, Special Deterrent force spokesman Ahmed bin Salem told the Associated Press. Two of Abedi’s brothers also have been arrested – one in England, and the other in Libya.

In the aftermath of Monday’s deadly attack, community leaders have been keen to stress that attackers like Abedi are a tiny minority in the Muslim community, and to underscore the spirit of unity in this melting pot city.

“If you look at Curry Mile and people across the community generally, people are understanding each other’s cultures,” said Irfan Chishti, Imam of the Central Mosque.

On Wednesday evening, girls in school uniforms stood near women in Islamic headscarves at a multi-faith vigil next to a statue of 19th-century Manchester industrialist and lawmaker Richard Cobden. A sea of flowers, candles, football scarves and balloons surrounded the statue. One pink, heart-shaped balloon was emblazoned with the message “RIP Angels” on one side and “”Manchester together” on the other.

Many tributes included pictures of bees – the community-minded insect has been a symbol of Manchester for years, dating back to when its booming textile mills helped power the industrial revolution.

A rabbi, Islamic leaders and Christians addressed the short meeting, vowing not to let hate drive a wedge between the city’s diverse religious groups.

So far, they seem to be succeeding; the city appears to have avoided a concerted anti-Islam backlash in the aftermath of Monday’s attack.

Law enforcement authorities also are playing a role. A police car briefly drove into the deserted car park of the Central Mosque Wednesday morning and asked staff if they had experienced any trouble since the concert blast. They said they had not.

Manchester, a city 160 miles (260 kilometers) northwest of London, now has a population of some 530,000. It has long been a magnet for migrants and others seeking work.

After its economic boom in the 19th century, Manchester gradually lost its sheen, becoming a gritty post-industrial city in the late 20th century.

It was then that it became a creative hub and a launching pad for influential bands ranging from The Smiths to Britpop powerhouse Oasis. In the late 1980s and early ’90s, the city was dubbed Madchester because of its hedonistic nightlife and bands.

All the while, migrants were arriving, weaving their cultures into the city’s tapestry. In the past, they came from Britain’s former colonies like India, Pakistan and the West Indies. More recently, they have come from the Middle East, but also from Russia and Poland.

One recent arrival is Aatef Otman, a 46-year-old Syrian refugee who works in the Sweet and Salt Middle Eastern Goods store, which sells everything from snacks like seeds, nuts and dates to water pipes.

Otman, who fled his home in the town of Daraa, arrived in Manchester 18 months ago after initially being settled in the Scottish city of Glasgow.

“I find Manchester more comfortable,” he said. “The community helped me more than Glasgow.”

Echoing comments made by Muslim leaders in recent days, Otman said he was horrified by the attack in his adopted homeland.

“It is just crazy,” he said. “Not crazy – more than that. Unhuman. That is what I believe in my heart.”

The one glaring source of division in this city is soccer. Fans are either supporters of Manchester United or its cross-town rival Manchester City.

Even those lines blurred Wednesday night as fans of both teams watched United beat Amsterdam club Ajax 2-0 in the Europa League cup competition final in the Swedish capital, Stockholm.

Fans spilled onto the streets of downtown Manchester after the match, kicking a ball around as heavily armed police looked on.

“We needed it,” said 22-year-old Connor Ward. “It was that boost that everyone needed.”/RGA