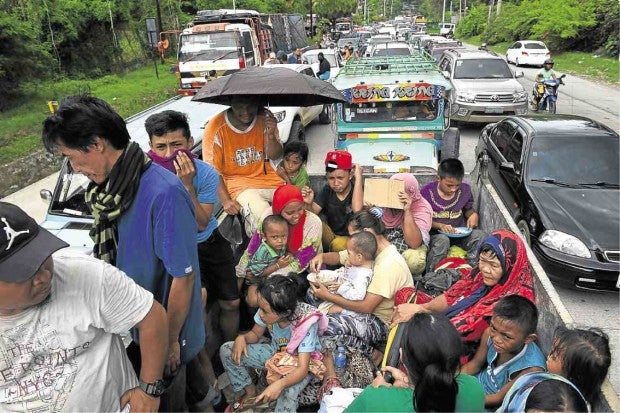 MASS EVACUATION Families fleeing Marawi City are caught in a traffic gridlock near a police checkpoint in Iligan City on Wednesday, a day after terrorists clashed with government forces. —AFP

COTABATO CITY—Marawi City Bishop Edwin dela Peña said he rushed back to his diocese after he received word about gunfights and explosions there from his secretary, who was calling to update him while he was on the road.

Around 8 o’clock on Tuesday night, six hours after the first report of clashes in Marawi, he received another call. Instead of his secretary’s voice on the other line, he heard a man who identified himself as an “Isis member.”

In an interview with the Church-run radio station here on Wednesday, Dela Peña said the man told him his group had seized Marawi parish priest Fr. Teresito “Chito” Suganob and other church workers.

By then, Marawi’s Cathedral of Our Lady Help of Christians, Dansalan College and the Marawi City Jail had been set on fire by members of the Abu Sayyaf led by Isnilon Hapilon and the Maute group, their ally.

As details of the attack in Marawi emerged, fears mounted that Asia’s largest Roman Catholic nation could be falling into a growing list of countries grappling with the influence of the Islamic State (IS) to which both the Maute group and Hapilon had pledged allegiance.

“We are in a state of emergency,” Duterte said on his return to Manila after cutting short his trip to Russia. “I have a serious problem in Mindanao and the [IS] prints are everywhere.”

The terrorists also freed 107 inmates, including members of the Maute group, from the city jail and the Malabang District Jail, 45 minutes away, according to Gov. Mujiv Hataman of the Autonomous Region in Muslim Mindanao.

At least five soldiers and two policemen were killed in clashes with the terrorists on Tuesday, according to a military officer who spoke on condition of anonymity. The officer said at least 33 other government troops also were wounded.

The President said one of the officers, a police chief, was stopped at a checkpoint and beheaded by the terrorists.

The terrorists gunned down another officer, Senior Insp. Freddie Manuel Solar, a 2007 graduate of the Philippine National Police Academy and the intelligence chief of the Marawi City police.

At least 13 terrorists were killed, according to military spokesperson Col. Edgard Arevalo.

GMA 7 reported nine civilians were killed by the gunmen, showing pictures of the bodies of the victims who had been tied up before they were shot.

Dela Peña said he was allowed to speak with Father Chito on the phone to assure him that the priest was still alive.

“They (terrorists) want to leave Marawi City Tuesday night and sought unilateral ceasefire from the Army or else they will kill Father Chito and other hostages,” Dela Peña said.

He said in the radio interview that he passed on the ceasefire demand to the military, which did not respond.

By the time the interview was over, more than 50 percent of Marawi’s over 200,000 residents had fled to nearby towns and the cities of Iligan and Cagayan de Oro, Hataman said.

Catholic church prelates appealed for the safety of the hostages and sought the help of  Muslim religious leaders for their release.

“I appeal to the conscience of the hostage takers not to harm the innocent as the Islamic faith teaches,” said Cardinal Orlando Quevedo, archbishop of Cotabato.

Catholic Bishops’ Conference of the Philippines president Archbishop Socrates Villegas urged Filipino Catholics to pray for the safety of the hostages.

true honor by the mercy and benevolence that are two of our God’s most exalted attribute,” Villegas said.

He said Suganob was not a combatant. “He was a threat to none …. His capture and that of his companions violates every norm of civilized conflict.”

The heavily bearded Suganob is a known peace advocate in Marawi. The 62-year-old priest headed the local chapter of the National Movement for Free Elections before leading the Parish Pastoral Council for Responsible Voting in Marawi.

Defense Secretary Delfin Lorenzana told The Associated Press (AP) late on Tuesday that there was a power outage in Marawi and there were “Maute snipers all around.”

Lorenzana spoke on the phone from Moscow, where he was accompanying Mr. Duterte.

Hapilon and the Maute group have formed an alliance and he has reportedly been designated as the alliance’s leader. An Arabic-speaking Islamic preacher known for his expertise on commando assaults, Hapilon was wounded by a military airstrike in January.

The United States is offering a bounty of $5 million for his capture.

Troops sealed off major entry and exit points to prevent Hapilon from escaping, military Chief of Staff, Gen. Eduardo Año, told AP by phone also from Moscow with the President.

He said the gunmen erected IS flags at several locations.

The Maute group has been blamed for a bombing that killed 15 people in Davao City last September and a number of attacks on government forces in Lanao del Sur, although it has faced setbacks from a series of military offensives.

The fighting in Marawi erupted on Tuesday afternoon after security forces raided a house which they believed Hapilon and his men had used as a rendezvous site.

More than 100 gunmen responded to the raid by burning buildings and staging other diversions, according to Lorenzana.

“It is difficult to root out from there,” he said. “The Mautes are embedded in the population.”

Hearing the first burst of gunfire, Abdul Bantuas, 40, said he thought it was part of the preparations for the holy month of Ramadan in Marawi where the sound of gunfire was common.

“But one, two and three shots became many. I told myself this is something unusual,” he said.

He saw Air Force planes flying above the city and heard “very loud explosions” near the Mindanao State University compound.

“One or two armed men tried to enter my house through the gate but it was locked, they knocked on houses, others fired their guns in the air, others waved black Isis flags,” he said.

Dino Mapandi said some of the gunmen burned at least four vehicles outside a Land Bank of the Philippines branch.

Bantuas said he decided to evacuate his family and waited overnight for a chance to flee from the city.

“It was the longest night of my life,” Bantuas said. “We did nothing but wait for the sun to shine so we can move out.”

On board a van, the Bantuases left at 7 a.m. on Wednesday. What used to be a 30-minute ride to Iligan took five hours because of the heavy traffic caused by the exodus, he said.

Mapandi said the men in his family decided to stay behind to watch over their four-house compound.

“It is so silent now,” Mapandi said in a phone interview around 1 p.m. on Wednesday.

“It’s like we’re in a ghost town. There’s no traffic, no people on the streets,” he said. “It’s like waiting for a storm.” —WITH REPORTS FROM NICO ALCONABA, PHILIP C. TUBEZA, JIGGER JERUSALEM, AFP AND AP