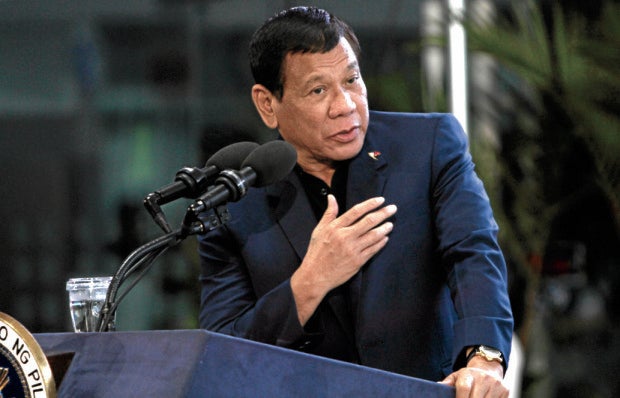 President Duterte warned on Wednesday that he would deal harshly with terrorists, after declaring martial law in Mindanao following clashes in Marawi City, Lanao del Sur province, between government forces and Moro extremists who had pledged allegiance to the Islamic State (IS) jihadist group in Iraq and Syria.

Mr. Duterte, who cut short a visit to Russia, said martial law in Mindanao under his administration would not be different from martial rule under dictator Ferdinand Marcos, remembered by many Filipinos as one of the darkest chapters of their recent history.

He said he had also suspended the privilege of the writ of habeas corpus in Mindanao, which would allow the authorities to arrest people without warrants.

“Martial law is martial law. My fellow countrymen, you’ve experienced martial law. It would not be different from what President Marcos did. I’ll be harsh,” Mr. Duterte said in a live interview on Facebook with Assistant Presidential Communications Secretary Mocha Uson aboard his plane before leaving Moscow to return to Manila.

Mr. Duterte said he had no choice but to declare martial law in Mindanao following a failed raid by soldiers on Tuesday on a hideout of the Maute terrorist group, which triggered clashes and chaos across Marawi City.

He said IS could not be allowed to gain a foothold in the Philippines and he would do whatever it took to rebuff extremists from the Maute group and the Abu Sayyaf, even if it meant many would die.

“Anyone now holding a gun, confronting government with violence, my orders are spare no one, let us solve the problems of Mindanao once and for all. Do not force my hand into it,” he said in a speech upon his arrival at Ninoy Aquino International Airport (Naia).

Mr. Duterte placed all of Mindanao, home to about 20 million people, under martial law on Tuesday night after gunmen, including a group reportedly led by Abu Sayyaf leader Isnilon Hapilon, rampaged through Marawi City.

He said the imposition would last for 60 days, but it could last a year if it would take that long to quell the crisis.

In a news conference at Naia after his arrival from Moscow, Mr. Duterte raised the possibility of expanding the coverage of his proclamation to the Visayas and even Luzon to protect the people from terrorists who had pledged allegiance to IS.

“I am appealing to the humanity of everybody, especially those who sow terror, do not allow [IS] to come in. I warn you again do not do it because as I have said, my response would be harsh. I will not hesitate to do anything and everything to protect and preserve the Filipino nation,” he said.

Martial law, Mr. Duterte said, would mean checkpoints, arrests and searches without warrant, and it would go on for as long as it took to restore order, but he would not tolerate abuses of power by police or soldiers.

“[A]nyone caught possessing a gun and confronting us with violence, my orders are shoot to kill. I will not hesitate to do it. My human rights is different. It is an institutional theory which we will reserve and observe. I said I will not allow abuses. The courts are open,” he said.

But human rights groups have expressed fears that martial law powers could further embolden Mr. Duterte, whom they have accused of allowing extrajudicial killings of thousands of drug suspects in a crackdown on illegal drugs.

Details from inside Marawi City were sketchy because the largely Muslim city of more than 200,000 people appeared to be largely sealed off and without electricity.

Battles abated on Wednesday as the military tried to isolate Maute gunmen while awaiting reinforcements.

Thirteen terrorists and seven members of the security forces have so far been killed and 33 troops wounded in the fighting, according to the military.