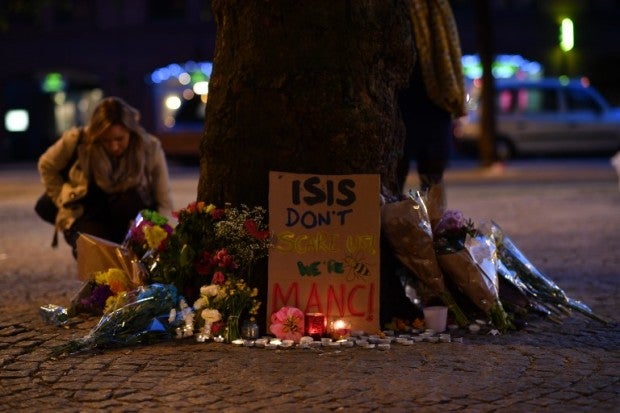 Messages and floral tributes are seen in Albert Square in Manchester, northwest England, on May 23, 2017, in solidarity with those killed and injured in the May 22 terror attack at the Ariana Grande concert at the Manchester Arena. Twenty two people have been killed and dozens injured in Britain’s deadliest terror attack in over a decade after a suspected suicide bomber targeted fans leaving a concert of Grande. British police on Tuesday named the suspected attacker behind the Manchester concert bombing as Salman Abedi, but declined to give any further details. AFP

MANCHESTER, United Kingdom — A homeless man begging at the Manchester Arena as the suicide attack went off was being hailed as a hero Tuesday after cradling a dying woman in his arms.

Amid the carnage and chaos as people began to leave the concert by US pop star Ariane Grande, who has a large teenage girl following, he rushed to help victims.

Stephen Jones, 35, who had been sleeping rough near the arena in the northwest English city, also ran to help deal with the gruesome aftermath.

Members of the public have raised thousands of pounds (dollars, euros) to pay them back for their heroics.

A tearful Parker recounted: “I heard a bang and within a split second I saw a white flash, then smoke and then I heard screaming.

“It knocked me to the floor and then I got up and instead of running away my gut instinct was to run back and try and help,” he told the Press Association news agency.

“There was people lying on the floor everywhere.

“I saw a little girl… she had no legs. I wrapped her in one of the merchandise T-shirts and I said ‘where is your mum and daddy?’ She said: ‘my dad is at work, my mum is up there’.”

He said he thought the mother had died.

Parker, who has slept rough in Manchester for about a year, regularly goes to the arena to beg for change as crowds head home from the 21,000-capacity venue.

He said he tended to a woman who died as he tried to comfort her.

“She passed away in my arms. She was in her 60s and said she had been with her family,” Parker said.

“The most shocking part of it is that it was a kids’ concert.

“There were nuts and bolts all over the floor. People had holes in their back.

“It’s the screams I can’t get over and the smell… I don’t like to say it but it smelled like burning flesh.”

The page was set up by Michael Johns, who said he felt compelled to help “one of our most vulnerable in society who showed great selflessness and courage”.

Johns said he was not yet in touch with Parker but was trying to track him down through journalists who spoke to him.

‘We need to give back’

Jones, a former bricklayer who has been sleeping rough for more than a year, recalled wiping blood from children’s eyes after dashing to help.

“It was a lot of children with blood all over them, crying and screaming,” he told ITV television.

“We were having to pull nails out of their arms and a couple out of this little girl’s face.”

Jones said it was “just instinct” to help.

“If I didn’t help I wouldn’t be able to live with myself walking away and leaving kids like that,” he said.

A crowdfunding page for Jones has also raised £10,000.

“Just because I’m homeless, it doesn’t mean I haven’t got a heart,” he said.

“There’s a lot of good people with Manchester who help us out and we need to give back too.” CBB