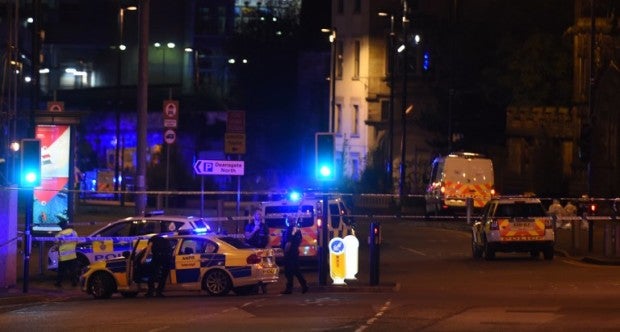 Police deploy at scene of a reported explosion during a concert in Manchester, England, on May 23, 2017.
British police said early May 23 there were “a number of confirmed fatalities” after reports of at least one explosion during a pop concert by US singer Ariana Grande. Ambulances were seen rushing to the Manchester Arena venue and police added in a statement that people should avoid the area.
/ AFP PHOTO / PAUL ELLIS

CAIRO, Egypt – The Islamic State group claimed responsibility on Tuesday for a bombing in the British city of Manchester that killed 22 people, including children, at a pop concert.

The group said in a statement published on its social media channels that “one of the caliphate’s soldiers placed bombs among the crowds”, and it threatened more attacks.

The group’s self-styled news agency Amaq separately said that “an Islamic State fighter” had carried out the attack.

In an earlier statement, Amaq said it was carried out by “a security squad”.