The gigs will be rescheduled, in the aftermath of the suicide attack at her Manchester show
By: Pocholo Concepcion - Desk Editor / @Inq_Lifestyle
Philippine Daily Inquirer / 10:28 PM May 23, 2017 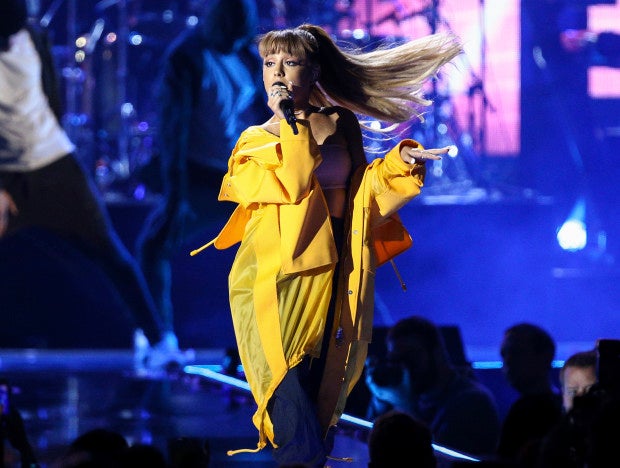 In this Sept. 24, 2016 file photo, Ariana Grande performs at the 2016 iHeartRadio Music Festival in Las Vegas. Police say there are “a number of fatalities” after reports of an explosion at an Ariana Grande concert at Manchester Arena in northern England on Monday, May 22, 2017.. (Photo by John Salangsang/Invision/AP, File)

Pop star Ariana Grande, shaken and “broken” after the May 22 suicide attack that left 22 dead and 59 wounded just after her Manchester Arena concert, has decided to temporarily cancel two shows at London’s O2 Arena, according to cosmopolitan.com/uk, quoting the website Celebrity Intelligence.

The London dates, originally set on May 25 and 26, will reportedly be rescheduled, but the new dates have yet to be announced.

Another website, tmz.com, says Grande will “also be suspending other gigs in the United Kingdom, plus Belgium, Poland, Germany and Switzerland, but nothing has been officially confirmed yet.”

Cosmopolitan.com/uk added: “Sources also told the website that the star was was ‘in hysterics’ and that her team is ‘deeply concerned about security.’ They also claim she is understandably too inconsolable to release a statement regarding her tour at this time.”

A third website, mirror.co.uk, said: “The O2 tweeted to warn ticketholders that the concerts might not go ahead in the wake of the deadly attack: ‘Ariana is due to perform at The O2 on Thursday and Friday and we will advise as soon as we can as to the status of those shows,’ it said in a short statement.”