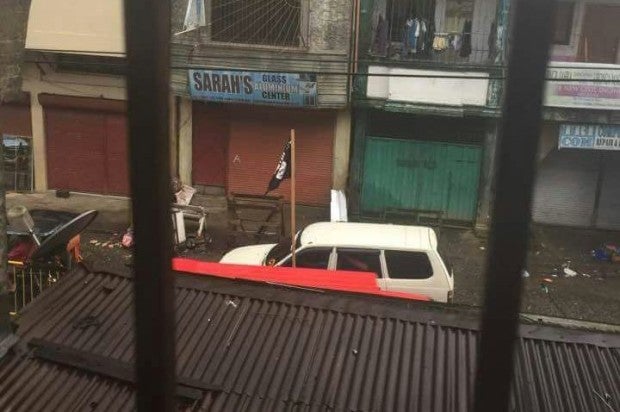 An Islamic State flag is seen at Marawi City where fierce fighting between government security forces and the Abu Sayyaf and Maute groups is raging. CONTRIBUTED PHOTO

The Armed Forces of the Philippines in Marawi City has been placed on “red alert” following the clashes with members of the Islamic State-linked Abu Sayyaf and Maute Terror Group.

Aside from the red alert, Lt. Col. Jo-Ar Herrera, spokesperson of the Army’s 1st Infantry Division, said that troops in other parts of 1st ID were ordered to be more vigilant due to possible diversionary attacks.

The highest alert status was also implemented among police in Northern Mindanao, according to regional police spokesman Supt. Lemuel Gonda.

Among the cities on full alert were Cagayan de Oro, Iligan and Bukidnon.

As of 8:30 p.m., military operations are ongoing in Marawi City.

“Our operation is still ongoing in Marawi City and sporadic firefight is still continuing. We cannot provide specifics at this point,” AFP spokesperson Brig. Gen. Restituto Padilla said in a statement.

The military official said that combined security forces are “determined” to fight the terrorists and finish them off.

“We are also acting on reports of armed men occupying the hospital and some other buildings,” he said.

He also assured the public that the government has enough troops on the ground as well as the right equipment.

“We strongly urge the residents in these areas to remain calm and stay in their homes or evacuate to safer areas if they still can,” he said.

Padilla also appealed to the public to continue providing enemy location and their movements if they are able to do so.

“Our citizens have the opportunity to contribute and are encouraged to perform their patriotic duty to ensure the safety of their community,” he said.