Board of Generals forms shortlist of AFP chief contenders 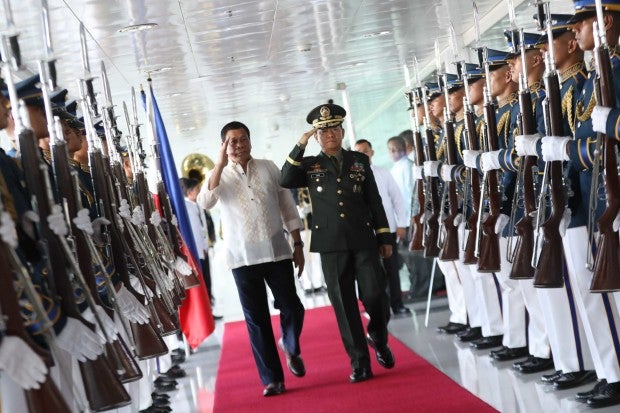 The Board of Generals of the Armed Forces of the Philippines has convened to create a shortlist of possible contenders who will replace AFP chief of staff Gen. Eduardo Año, who is retiring next week.

“Nag-meet sila, I understand early today or yesterday and they formed a shortlist but I’m not privy to that,” said AFP spokesperson Brig. Gen. Restituto Padilla on Monday.

Año was recently named as secretary of Interior and Local Government by Duterte. His term was supposed to be until Oct. 26 when he reached the mandatory retirement age of 56, but it was cut short due to his Cabinet appointment.

Once the list of possible candidates for the next AFP chief is finalized, it will be sent to Lorenzana, who will forward it to the President.

“Maaring today or tomorrow,” Padilla said when asked when the list could be forwarded to Duterte.

Lt. Gen. Rey Leonardo Guerrero of the Eastern Mindanao Command based in Davao City is reportedly one of the leading contenders for the next AFP chief, according to reports. He would only serve for about six months, as he reaches the mandatory retirement age in December. JE/rga