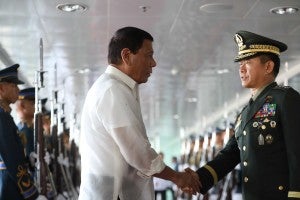 President Rodrigo Roa Duterte shakes hands with Armed Forces of the Philippines (AFP) Chief of Staff Lt. Gen. Eduardo Año as he is accorded with full military honors at the Ninoy Aquino International Airport on May 10, 2017 where he delivered his speech prior to his departure for his official visits to Cambodia and China and working visit to Hong Kong. PRESIDENTIAL PHOTO

MANILA — Will the Armed Forces see a revolving door policy for its chiefs of staff under President Duterte?

The President could truncate the term of AFP Chief of Staff General Eduardo Año to pave the way for Army Lieutenant General Rey Leonardo Guerrero, who currently heads the Eastern Mindanao Command (Eastmincom) that includes Davao City in its area of responsibility.

Año, a member of the Philippine Military Academy (PMA) Class of ‘83, is set to retire in October. Guerrero, of PMA ’84, will retire in December this year.

Sources told the Philippine Daily Inquirer that Año would be asked to retire in June, so that President Duterte could name Guerrero as chief of staff and give him six months in the post.

If this happens, it would mean that President Duterte’s first three chiefs of staff would have held office for only six months each while the military contends with the commander-in-chief’s policy shifts, including more military engagements with China and Russia.

“That’s the same strategy that GMA used, to dance with the generals,” said security analyst Chester Cabalza, referring to then President Gloria Macapagal-Arroyo who was criticized for her revolving door policy in the military.

The Commander-in-Chief tends to give the generals a “high regard with short term appointments,” Cabalza said.

“It is actually to preserve the presidency. It’s a political strategy,” he added.

On Wednesday, Mr. Duterte announced that Año would be the next Secretary of Interior and Local Government (SILG), an unprecedented appointment, but that he would be staying on as AFP chief of staff
until his term expires.

Shortly after the President made the announcement, the rogue AFP Twitter account @altTeamAFP said “Mr. Duterte wants Gen. Año to retire earlier than October to give LtGen. Guerrero a six-month stint as CSAFP.”

It was a reported plan of Mr. Duterte that @altTeamAFP tweeted about as early as March.

The possible appointment of Guerrero is Mr. Duterte’s “gift to his favorite soldier who was once Task Force Davao Commander and [a] member of PGMA’s [President Gloria Macapagal-Arroyo] PSG [Presidential Security Group],” @altTeamAFP said on Wednesday.

Inquirer sources said that Guerrero has had the backing of the President’s daughter, Davao City Mayor Sara Duterte-Carpio since 2016, when the new Commander-in-Chief was looking for his first AFP chief of staff.

Then Gen. Ricardo Visaya got the post and retired in less than six months.  SFM