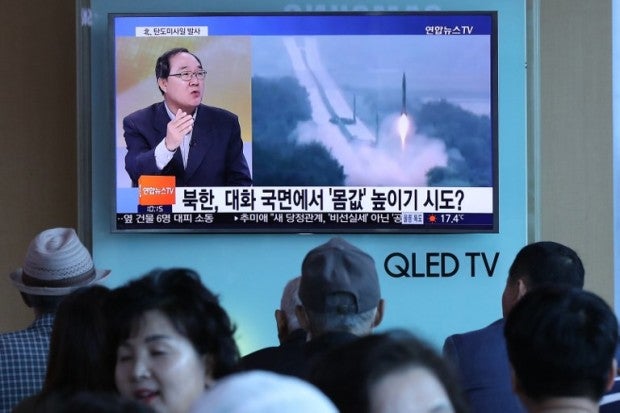 People watch a television news program, showing file footage of a North Korean missile launch, at a railway station in Seoul on May 14, 2017. North Korea confirmed firing another missile on Sunday, May 21, 2017, and said it was ready to be deployed for military action. AFP

Leader Kim Jong-Un oversaw the launch, the state-run Korean Central News Agency reported, adding that he “approved the deployment of this weapon system.”

KCNA said the missile tested was the Pukguksong-2, a land-based version of Pyongyang’s submarine-launched weapon, which uses solid-fuel which allows for immediate firing.

“Now that its tactical and technical data met the requirements of the Party, this type of missile should be rapidly mass-produced in a serial way to arm the KPA Strategic Force,” Kim said, referring to the North’s army, KCNA reported.

The missile, which was described by Washington as medium-range, was fired from Pukchang in South Pyongan province and traveled about 500 kilometers (310 miles) before landing in the Sea of Japan, according to the South’s armed forces.

The US, South Korea and Japan sharply denounced the launch and jointly requested an emergency meeting of the United Nations Security Council on the matter.

The launch came just one week after the North fired a Hwasong-12 intermediate-range missile, which according to Pyongyang flew almost 800 kilometers and was capable of carrying a “heavy” nuclear warhead.

The launches, and a threatened sixth nuclear test, have fueled tension with the administration of US President Donald Trump, who has vowed that such an ICBM launch “won’t happen.” CBB/rga