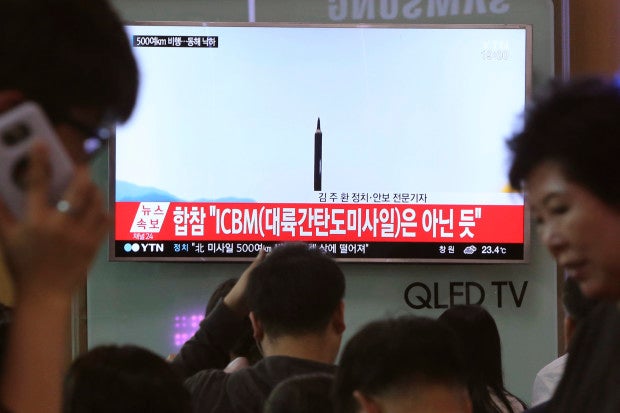 People watch a TV news program showing a file image of a missile launch conducted by North Korea, at the Seoul Railway Station in Seoul, South Korea, Sunday, May 21, 2017. North Korea on Sunday fired a midrange ballistic missile, U.S. and South Korean officials said, in the latest weapons test for a country speeding up its development of nuclear weapons and missiles. The letters read: “It does not seem to be an ICBM missile.” (AP Photo/Ahn Young-joon)

SEOUL—North Korea fired a medium-range missile on Sunday, US and South Korean officials said, the latest ballistics test for a country speeding up its development of nuclear weapons and missiles.

The missile was fired from an area near the North Korean county of Pukchang, in South Pyongan Province, and flew eastward about 500 kilometers, South Korea’s Joint Chiefs of Staff said.

The US Pacific Command said it tracked the missile before it landed into the sea.

White House officials traveling in Saudi Arabia with President Donald Trump said the system, which was last tested in February, had a shorter range than the missiles launched in North Korea’s most recent tests.

An official from South Korea’s Joint Chiefs of Staff also said the missile appeared to be similar in range and apogee to the midrange missile that North Korea test-fired in February.

The missile launched on Sunday reached a maximum altitude of 560 km, said the official, who spoke on condition of anonymity, citing office rules.

In February, North Korea used a launcher truck to fire a solid-fuel missile that it calls the Pukguksong (Polaris)-2, a land-based version of a submarine-launched missile the country revealed earlier.

That missile traveled about 500 km before crashing into the sea, according to South Korean and US officials.

The February launch, the North’s first missile test after Trump took office, alarmed neighbors because solid-fuel missiles can be fired more quickly than liquid-fuel missiles, which need to be fueled before launch and require a larger number of vehicles, including fuel trucks, that could be spotted by satellites.

He did not make a public statement after the meeting.

In Tokyo, Japanese Prime Minister Shinzo Abe called the launch a “challenge to the world” that tramples international efforts to resolve the North Korean nuclear and missile problems peacefully, and vowed to bring up the issue as the “main agenda” of this week’s G-7 summit in Italy.

The launch came a week after North Korea successfully tested a new midrange missile that it said could carry a heavy nuclear warhead.

Experts said that rocket flew higher and for a longer time than any other missile previously tested by North Korea, and that it could one day reach targets as far away as Hawaii and Alaska.

On the watch of third-generation dictator Kim Jong-un, North Korea has been aggressively pursuing a decades-long goal of putting a nuclear warhead on an intercontinental ballistic missile capable of reaching the US mainland.