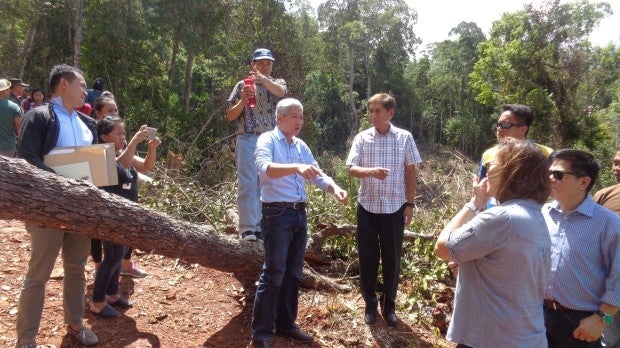 *Environment Secretary Roy Cimatu came by helicopter to Brooke’s Point in Palawan to investigate claims that Ipilan Nickel Corporation INC) had illegally clear cut thousands of old-growth trees. He met with local leaders for a dialogue during his first field work in his capacity as DENR chief. PHOTO BY REDEMPTO ANDA

BROOKE’S POINT — For newly appointed Environment Secretary Roy Cimatu, his first field work here was both a job orientation and a decision-making moment.

A military career officer all his life, Cimatu was on unfamiliar territory but did not hesitate to ask the most basic questions, whose answers he would have been expected to know as the country’s top environmental officer.

“Please explain to me what MPSA (mineral production sharing agreement) is, and why this company has possession of this land,” he asked his staff on Friday at a dialogue between officials of a mining company and the local government deep in the mountains here.

Cimatu was in Palawan to investigate claims that the company, Ipilan Nickel Corp. (INC), had illegally cut thousands of old-growth trees. Days earlier, hundreds of Brooke’s Point residents, led by Mayor Mary Jean Feliciano, had stormed the INC compound to stop the tree-cutting.

By then, company workers had cleared over 20 hectares of natural forest in Palawan,  a province considered as the Philippines’ last frontier in ecological conservation.

In response to Cimatu’s question, Roland de Jesus, Mining and Geosciences Bureau director, explained the government’s long-established system of entering into agreements with mining companies to exploit public lands for minerals extraction and sharing the proceeds with them. He also discussed the regulations that oversee the whole process.

Easing into his role, Cimatu upheld the cancellation of the company’s tree-cutting permit and issued a warning to irresponsible miners about “going around the law.”  He added:  “You should be man enough to face the consequences if you make a mistake.”

During the dialogue, the Department of Environment and Natural Resources (DENR) found that the company had conducted tree-cutting activities despite repeated notices from the DENR canceling its permit.

Cimatu’s predecessor, Gina Lopez, had already withdrawn INC’s permit but the company proceeded with the tree-cutting anyway, claiming that an appeal it had filed allowed them to continue operations.

“We will allow mining so long as they follow the law,” Cimatu said later, unaware that his predecessor had taken the same stance.

As the government convoy tried to reach the area where most of the tree-cutting took place, it found the road blocked by trees that were deliberately felled to slow down the DENR party.

Aside from the company’s brazen defiance, Cimatu learned that INC had refused his representative, Bernardino, access to the mine site.

“I’ve seen enough from the air,” the DENR secretary told reporters. “I saw the area, there really are no more trees. It was very unfortunate that this happened,” he added.

INC was one of three mining companies in Palawan that had been sanctioned by Lopez during her short term. With its MPSA expiring next year, the company needs to convince the government to renew its agreement for another 25 years.

Regulatory officials said they expect INC to lobby hard for the renewal of its MPSA next year as it was recently bought by major mining conglomerate, Global Ferronickel Holdings, a publicly listed company and the country’s third largest exporter of nickel ore.

The INC concession covers close to 3,000 hectares and sits atop the town’s main watershed and rice production farms. Company officials said mining operations would not affect the local water supply.

“I’m confident the DENR secretary will listen to our voice, (and our position) that we don’t need this mining company in our town,” Feliciano said.