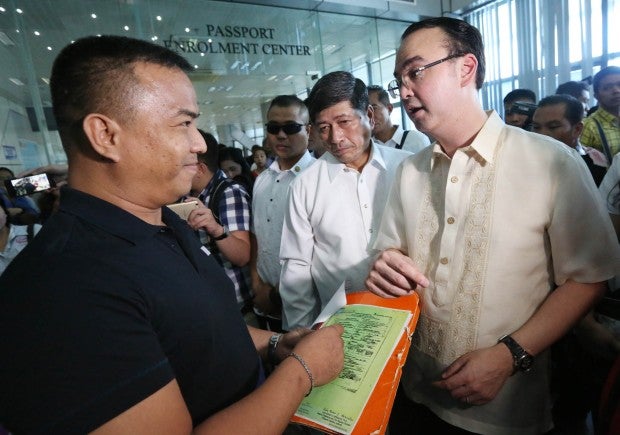 Newly installed Foreign Affairs Secretary Alan Peter Cayetano on Friday maintained that the ball was in the European Union’s hands to prove that the aid it provides the Philippines comes without conditions and to guarantee that it will not interfere with the country’s internal affairs.

He assured Filipinos that despite the country’s rejection of conditional aid, relations with the EU remained good even if it was going through a rough patch.

Speaking to reporters after his inspection of the Office of Consular Affairs in Aseana, Cayetano said Filipinos should all be in agreement not to accept foreign aid from countries that set conditions.

“The ball is actually in the hands of the EU. It is for the EU to tell us that there are no strings attached (on the aid). That this is humanitarian help. Number two, that we will not interfere in your internal affairs, and number three, for us to hear some support from them in our law and order campaign,” he said.

He said these agreements specified object, terms and other details and “is binding for both sides.”

“We have, as of now, received no written communication from the Philippine government on this matter,” Jessen said.

Cayetano said there might be a lot of misunderstanding of the government’s pronouncement on foreign aid, “but I think it’s a good policy.”

“We are just drawing a red line,” he said.

But a leading opposition lawmaker has criticized President Duterte’s what he called a “skewed double standard.”

While the government has rejected assistance from the EU to assert autonomy amid its bloody antidrug campaign,  Albay 1st District Rep. Edcel Lagman pointed out that it accepts aid from rival maritime claimant China.

He noted that Beijing’s pledges of loans and investment were conditioned on Manila’s nonenforcement of the July 2016 ruling that struck down the former’s claim over much of the South China Sea.