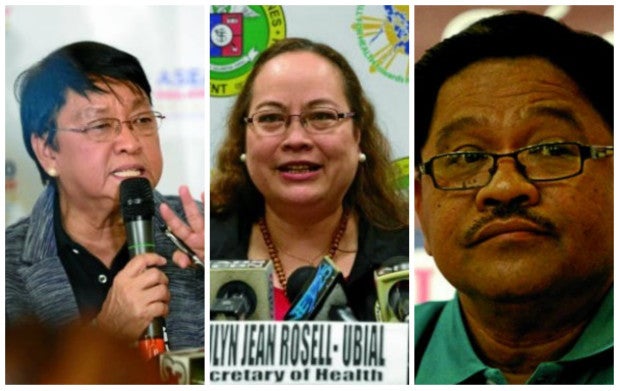 They said the CA had effectively terminated hearings specifically for the health secretary and the two left-wing members of the Duterte Cabinet for the remainder of the current congressional session.

Senate President Aquilino Pimentel III and Senate Majority Leader Vicente Sotto III told the Inquirer that this week’s CA hearings, which saw the confirmation of Sen. Alan Peter Cayetano as foreign secretary, would be the last for the three Cabinet members before Congress adjourns on June 1.

“All those whose appointments/nominations have been submitted to the CA as of this moment  and who are not confirmed by adjournment this May/June shall be considered ‘bypassed,’” Pimentel said in a text message.

Pimentel, who is CA chair, downplayed the bypass, saying it would have “no effect on their being secretaries if they are reappointed by the President immediately and I see no reason why the President will not reappoint them.”

The CA had held one confirmation hearing each for Taguiwalo and Ubial. It had canceled a second hearing for Taguiwalo on Wednesday because questions raised by CA members on Ubial and two new ambassadors, and objections from opposition to the health secretary, consumed much of the time.

Taguiwalo had complained about the delay but Senate members of the CA said the proceedings were not deliberately extended, citing the lack of time.

The CA committee on agrarian reform had set a hearing on May 24 for Mariano’s confirmation but canceled it on Thursday.

The confirmation hearing set by the CA national defense committee, also for May 24, for 26 general/flag and senior officers of the military would be held as scheduled.

Sotto explained that the Senate rules committee would not be able to settle Sen. Benigno “Bam” Aquino III’s resolution to review CA rules on secret balloting before Mariano’s scheduled hearing.

Aquino raised the issue when the CA held a caucus on Wednesday, according to Sotto.

Aquino wanted to review the holding of a secret vote following the CA’s rejection of  Gina Lopez as environment secretary.

“My hands are tied,” Sotto said. “It’s useless to call a hearing if we cannot confirm. [The hearings] would also be near the sine die adjournment.”

Sotto said the CA could hold a hearing for the military officers next Wednesday because there would be no need for secret voting.

He also said Pimentel and CA majority leader Rodolfo Albano II would be unable to attend any CA hearing as they would be joining President Duterte in his visit to Russia next week.