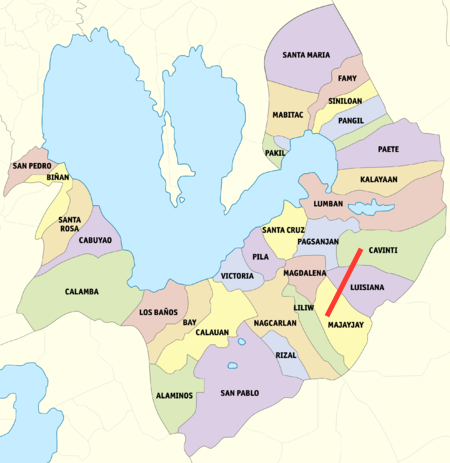 The towns of Luisiana, Cavinti and Majayjay (with red line) are now on red alert. (Wikipedia maps)

SAN PEDRO CITY, Laguna — At least one government soldier was killed in the almost seven-hour gun battle between the Philippine Army and the New People’s Army (NPA) in Laguna and Quezon provinces.

The death of Private First Class Gregorio Maico was confirmed by Senior Inspector Romeo Manga, police chief of Luisiana town in Laguna, after the Army requested the police to conduct an autopsy.

On Thursday, tension remained high in the adjacent towns of Luisiana, Cavinti,and Majayjay in Laguna and in Lucban town in Quezon after the rebels ambushed two military vehicles by setting off a landmine along the Cavinti-Luisiana road around 3 p.m. on Wednesday.

The gunfight continued in the vicinity of the two municipalities until around 7 p.m. Five military personnel and two civilians were initially reported hurt from the blast.

Manga said they have received reports that the rebels have long been planning to “take over” the police station in Luisiana.

The police in the three Laguna municipalities are placed on full alert.  SFM