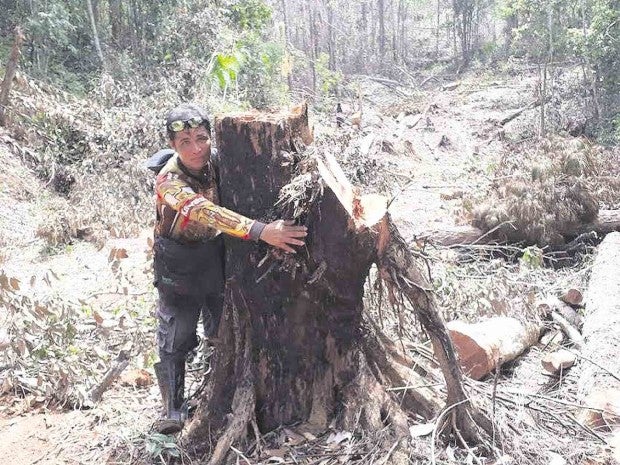 CHOPPED DOWN Officials of Brooke’s Point in Palawan province point their fingers at a mining firm for clearing an old growth forest in the town. The firm, however, says the tree cutting is covered by valid permits. —CONTRIBUTED PHOTO

PUERTO PRINCESA CITY—One of the large-scale mining companies operating in Palawan province cut more than 15,000 trees in Brooke’s Point town despite the cancellation of its environmental clearance certificate (ECC) and the absence of permits from the local government, local officials said.

Brooke’s Point Mayor Jean Feliciano accused Ipilan Nickel Corp. (INC) of clearing more than 10 hectares of old growth forests in the town, saying the tree cutting went in earnest days after the appointment of Gina Lopez as environment secretary was rejected by the Commission on Appointments.

INC was among the mining firms that Lopez had ordered closed.

“[INC] destroyed over 15,000 trees covering more than 10 hectares of natural forests,
razing them to the ground. Their ECC, along with their
cutting permit, had already been canceled by the Department of Environment and Natural Resources (DENR). They don’t even have mayor’s and business permits,” Feliciano told the Inquirer.

The town government of Brooke’s Point sought on Wednesday the cancellation of the company’s strategic environmental plan permit issued by the Palawan Council for Sustainable Development, a provincial regulatory body.

According to Feliciano, the provincial government is also filing next week illegal logging charges against the company.

Teodoro Jose Matta, provincial legal officer, said the Palawan government had filed charges against eight INC personnel involved in the tree cutting for violation of Republic Act No. 9175 (Chainsaw Act of 2002). He said his office was also preparing illegal logging charges against the company and its officers.

But in a statement e-mailed to the Inquirer, INC’s parent company, Global Ferronickel Holdings Inc. (FNI), said its operations were covered by valid permits. FNI is one of the country’s top producers and exporters of nickel ore.

“[INC] has the necessary special tree cutting and earth-balling permit issued by the DENR for its operations in Palawan. INC holds faithful compliance with the law and adheres to sustainable development,” Dante Bravo, FNI president, said in the statement.
The company, which appealed the cancellation of its ECC, accused the DENR of failing to give it due process prior to Lopez’s cancellation order.

The firm said the ECC cancellation was a subject of a motion for reconsideration.

“Under the Revised Administrative Code, the pendency of a motion for reconsideration stops the effectivity of an order of a department,” it said.

The company’s mining concession boasts of over 50 million wet metric tons of nickel ore that the company plans to ship to China and Australia.

Feliciano, who had opposed the project as a civil society member and antimining activist prior to her election as mayor, accused the company of ignoring the order of Lopez in December canceling the company’s ECC for its failure to undertake the project in the prescribed period stated in its permit.

“They had been informed by the DENR that their ECC had already been canceled but they proceeded anyway. They even violated the terms of their previous tree-cutting permit that required them to earth-ball big trees and conduct it under DENR supervision,” she said.

Feliciano also accused the company of blocking efforts of the local government to inspect and assess the damage of its tree-cutting activities within its concession.

She said the affected areas included the town’s watershed.