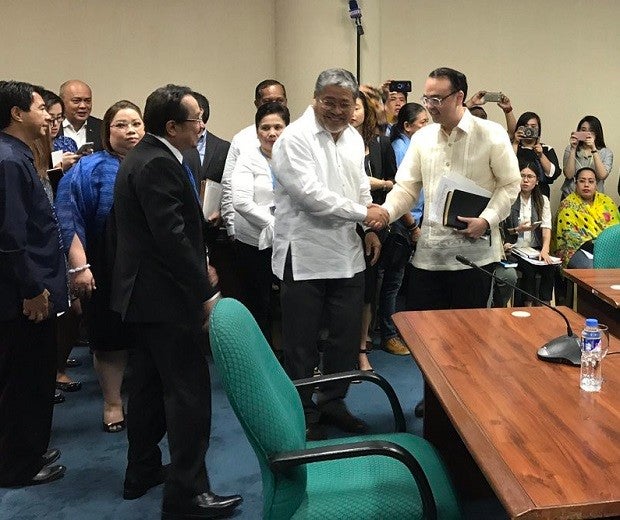 It took only about two minutes for a panel of the powerful Commission on Appointments (CA) to approve on Wednesday the nomination of Senator Alan Peter Cayetano as Secretary of the Department of Foreign Affairs (DFA).

Cayetano was not even called to take his seat when a motion to approve his nomination was made at the CA’s committee on foreign affairs, being chaired by Senator Panfilo Lacson.

When no committee member objected to the motion, Lacson congratulated Cayetano and told him in jest that he would be allowed to talk for five minutes only. The nominee is known for giving lengthy statements.

READ: Cayetano gets quick nod of Commission on Appointments panel

Cayetano took his seat anyway and told the committee that he had prepared an opening statement.

“I will make a commitment to you today that I will do my best na hindi po kayo mapahiya,” Cayetano said.

Lacson described the proceeding as the “shortest confirmation hearing of a Cabinet Secretary.”

The committee will then transmit its recommendation to the CA plenary for either approval or rejection.

Talking to reporters after the hearing, Cayetano repeated his promise to do his best at the DFA.

“…I thank the Commission and gagamitin ko itong mabilis at painless na confirmation bilang paalala that I have to do my best,” he said.