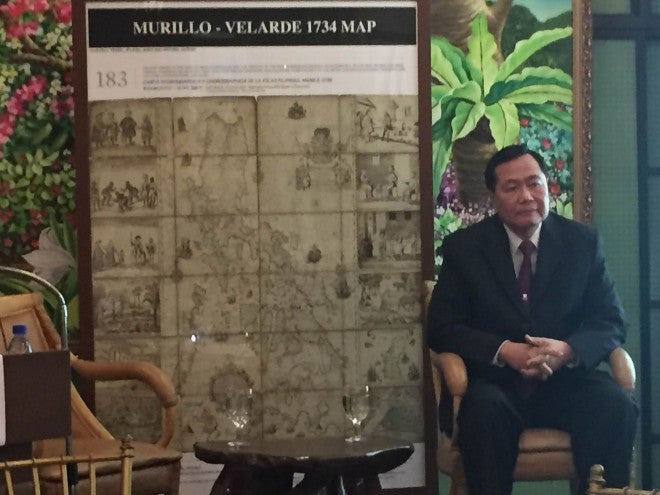 Supreme Court Senior Associate Justice Antonio Carpio on Tuesday said he doubted that joint exploration and development with China for resources in the South China Sea would work, as Beijing would insist on its sovereignty over the heavily disputed waterway.

“In joint development, the rule is simple, we have sovereign rights over Reed Bank and other areas so that must be recognized because we can’t give that up,” Carpio told reporters after attending a defense forum in Parañaque City

“Joint development on commercial terms, yes. But on the sovereignty issue, that’s ours,” he said.

President Duterte said on Tuesday that he was open to the idea.

“Last time that [joint development] was tried, China said, ‘You have to put there in the agreement that sovereignty belongs to China.’ And nobody can do that. No Philippine official can do that,” Carpio said.

The JMSU lapsed in 2008 because ceding sovereignty to China over the area became an issue.

The Philippine government ordered the suspension of drilling on Recto Bank as a result of the territorial dispute with China.

“It’s the Philippine government that grants the service contract [for drilling]. That means that’s ours. But that’s why China doesn’t want to agree to that,” Carpio said.

In his lecture at the defense forum, Carpio said Panatag Shoal, a rich fishing ground off Zambales province, would be the next flash point in the South China Sea dispute.

Carpio said that should China gain control of Panatag Shoal “it’s game over for all of us (claimant countries) because China will have full control of the South China Sea.”

He said China would use Panatag Shoal and the Spratlys to enforce its claim to almost the entire South China Sea.

“China also wants the South China Sea as a sanctuary for its nuclear-powered submarines, free from surveillance by US submarine-hunting Poseidon airplanes or US nuclear attack submarines. China wants a second-strike nuclear capability,” Carpio said.

He added that China would have the capability to place the entire South China Sea within its air defense identification zone.

Panatag Shoal, he said, was the only remaining hole in the defense system that China apparently wanted to put up in the area.