Bring it on, Duterte says on ICC case 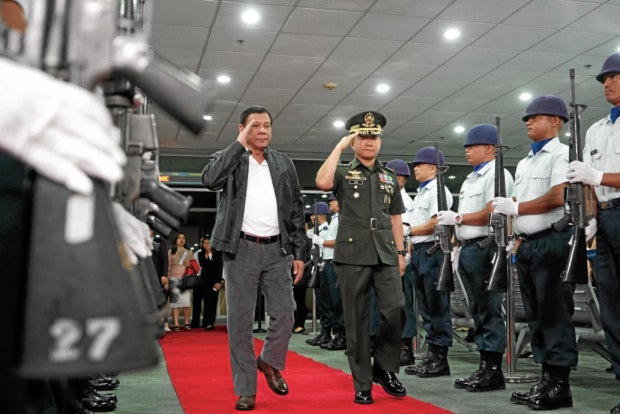 BACK HOME President Duterte arrives at Francisco Bangoy International Airport in Davao City on Tuesday after returning from his trip to Cambodia, Hong Kong and China. —MALACAÑANG PHOTO

President Duterte has dared Magdalo Rep. Gary Alejano and Sen. Antonio Trillanes IV to “go ahead” with bringing a case against him in the International Criminal Court (ICC) for alleged human rights violations in connection with his war on drugs.

“They are free to do it. This is a democracy,” Mr. Duterte told reporters in Davao City on Tuesday shortly after his arrival from Beijing where he attended the Belt and Road Forum on China’s new trade route linking Asia, Europe and Africa.

The President issued the challenge a day after his allies on the committee on justice of the House of Representatives killed an impeachment complaint that Alejano had filed against him for insufficiency in substance.

Alejano said he was considering going to the ICC to make Mr. Duterte liable for the high crimes he had committed, including the murder of 8,000 drug suspects in his war on drugs and the killings carried out by the Davao Death Squad on his orders as Davao City mayor—charges contained in the impeachment complaint.

The complaint also accused Mr. Duterte of corruption, unexplained wealth and taking a “defeatist stand” against China in the territorial row in the South China Sea.

Trillanes said other groups could use “other modes” against the President to seek justice and accountability. “There are a lot of ways. Watch out for it.”

The President acknowledged allegations that he induced extrajudicial killings in his war on drugs could be raised to the ICC.

“It is true that there are deaths—is there a drug war where no one is killed?” Mr. Duterte said. “But not in the character and kind that I was dished out, including ordering the killing of a child.”

He said that his administration was not to blame for the deaths of thousands of people in the crackdown on drugs, and that investigations had already been conducted by various bodies, which cleared him of any wrongdoing.

“What do they want … Some guys are being taken for a ride a thousand times,” the President said.

The dismissal of Alejano’s complaint was widely expected since the House is dominated by Duterte allies.

But the President’s critics hope the procedure could bolster a lawsuit earlier filed against him by a Filipino lawyer in the ICC for alleged extrajudicial killings by showing that domestic efforts to stop Mr. Duterte have failed.

The dismissal of Alejano’s complaint, filed in March, bars any new impeachment case against the President until next March.

Detained Senator De Lima said on Tuesday that Alejano should be commended for standing up to the President even after the House justice committee killed the impeachment complaint.

In a statement, De Lima said the House committee dismissed the complaint “on the fictitious ground” that Alejano lacked personal knowledge of the facts on the complaint.

She said committee members led by Majority Leader Rodolfo Fariñas required Alejano “to only present matters on which he had personal knowledge, even when no law or rules require the same.”

The independent minority bloc led by Albay Rep. Edcel Lagman said the only “remedy” for the early demise of the impeachment complaint against Mr. Duterte “is with the people.”

“The remedy is for the people to voice out opinion on the matter … as far as they can go. I am just saying there should be a collective voice of the people to really demand judiciousness and fairness in [impeachment] proceedings,” Lagman said.

In a press conference, Speaker Pantaleon Alvarez III said only a mental institution, and not the ICC, should tackle the complaint filed by a lawyer against him, Mr. Duterte and several others, accusing them of committing high crimes and mass murder for the thousands of deaths that resulted from the administration’s campaign against illegal drugs.

“In the first place, the ICC does not have jurisdiction. It should have been filed with a mental hospital,” Alvarez said. —WITH REPORTS FROM CHRISTINE O. AVENDAÑO AND NIKKO DIZON