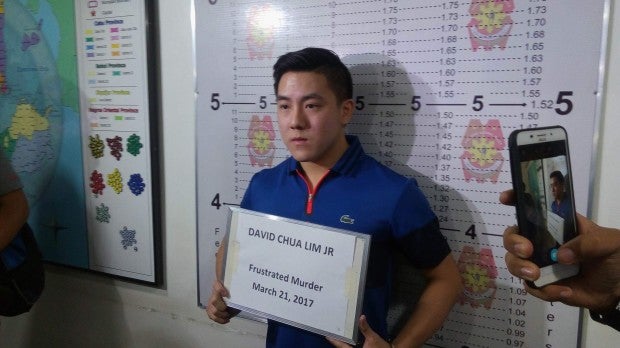 FILE – Mug shots of road rage suspect David Lim Jr. are taken during his booking at the Police Regional Office in Central Visayas. Charges of frustrated homicide and illegal gun possession to be filed against him before the Cebu City Prosecutors’Office today. Ador Vincent Mayol, CDN

CEBU CITY – A Cebu City judge has granted the request of Cebu road rage shooting suspect David Lim Jr. to travel abroad for a weeklong cruise with his family in the United States and Canada.

In his order dated May 10, 2016, Judge Alexander Acosta of the Regional Trial Court Branch 9 found no problem with the suspect’s plea as long as he would return to face the charges against him.

“The crime charged against herein accused is not among those that affects the interest of the national security, or public health, wherein the right to travel could be impaired as provided under section 6, article 2 of the 1987 Constitution of the Philippines,” he said.

Before leaving the country, the accused was mandated to post a bond of P300,000 in court and to submit a certified true copy of his valid passport. Within three days after he returns to the country, Lim was ordered to personally report to the court. Acosta set Lim’s arraignment on June 16.

Lim’s lawyers Gilbert Viloria and Conrado Sarmiento Jr. earlier asked permission from the court to let the accused join his family for a trip abroad.

A year ago, they said Lim and his family already booked a cruise tour from Alaska, USA to Vancouver in Canada from May 29 to June 2, 2017.

Lim and his family are set to return to the country on June 8.

They said the family purchased airline tickets for their trip abroad in December last year.

The request was opposed by lawyer Mundlyn Misal-Martin, the counsel of the victim, who earlier filed a motion for the issuance of a Hold Departure Order (HDO) against Lim.

An HDO, she said, would ensure that the accused won’t leave the country to evade criminal prosecution, and to guarantee that he is properly brought before the bar of justice.

Martin said Lim has not yet been arraigned, and if the latter leaves the country, he might be placed beyond the reach of the courts.

“Without being arraigned, and much more that he is allowed to travel abroad, justice can never be attained considering the wealth and influence of his family, he can surely sustain himself in another country thereby leaving his victim without a chance at justice,” she said in a pleading filed in court.

He was charged with frustrated homicide and illegal possession of ammunition. The gun he used in shooting the victim was purportedly lost. Lim secured temporary liberty after he posted bail in court.