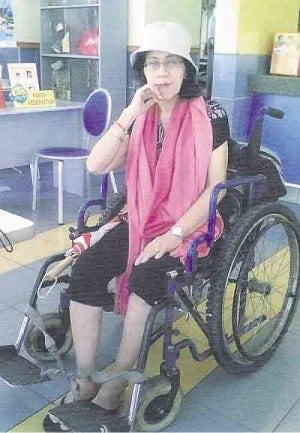 A resident of Malibay, Pasay City, 63-year-old Editha used to be a freelance journalist.

“I used to write mostly about health issues, submitting my stories to major newspapers. Before I got sick, I submitted an article in 2005 about the inauguration of the Malate Crown Plaza to the Inquirer’s Property section,” she said.

Lagarile, a 1974 AB Mass Communication graduate from the Pamantasan ng Lungsod ng Maynila, suffered a severe stroke in 2008. As a result, the left side of her body was paralyzed, confining her to a wheelchair.

On May 16, 2010, she fell while undergoing physical therapy, resulting in a pelvic fracture. On Jan. 21, 2013, she successfully underwent total hip replacement surgery with the help of a charity medical mission at the University of Sto. Tomas Hospital.

After surgery, she resumed physical therapy but her sessions were halted once more when she fell a second time.

For now, she needs to undergo an intensive physical therapy program twice a week for the next three months. The treatment, to be done at San Juan de Dios Hospital in Pasay City, would cost P12,000 a month.

“I am appealing to kindhearted donors and readers of this newspaper for financial assistance, both for the sessions and my prescription medicine. May God always bless you and keep you all healthy,” she said.