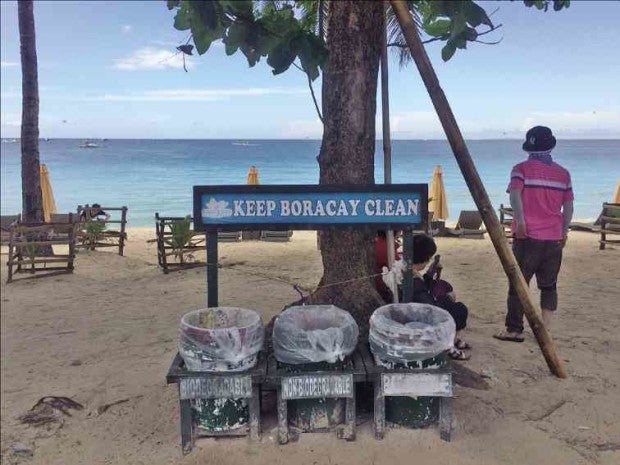 Authorities have launched a campaign to keep the beaches of world-famous resort island, Boracay, free from trash. Aside from placing trash cans in places near the water, the local government of Malay town passed a new law expanding the list of no-drink zones. —CONTRIBUTED PHOTO

ILOILO CITY—Areas where tourists could drink until they drop in Boracay are to shrink further under a new ordinance designating more places where consumption of alcoholic beverages would be outlawed.

The municipal council of Malay town, which has jurisdiction over the world-famous island resort, had passed a new law that would regulate consumption of alcoholic drinks in public areas, including beaches.

Under the new law, drinking of alcoholic beverages is prohibited within five meters from riverbanks, public parks and beach areas.

Violators would be fined P500 for the first offense, P1,000 for the second offense and P2,500 or imprisonment for 30 days for the third and succeeding offenses.

A similar ordinance was passed earlier but applied only to the white sand beach in Boracay and not all public areas in the municipality, according to Malay Councilor Nenette Aguirre-Graf, who authored the new ordinance.

She said tourists and guests could still consume alcoholic beverages in beachfront hotels, bars, restaurants and other areas at the beach, but not extending beyond the vegetation line.

A separate ordinance passed earlier also prohibits smoking beyond the vegetation line to reduce the amount of cigarette butts being thrown on the beach.

The ordinance would be enforced mainly by members of Malay auxiliary police with help from members of Boracay Tourist Assistance Center, the island’s police force.

Al fresco dining and drinking at the four-kilometer white sand beach of Boracay Island are popular among tourists.

Aside from dining and drinking in beachfront restaurants, bars and resorts, many tourists also bring and consume drinks on the sand and near the water.

Graf said the measure was crafted for the security and safety of tourists and residents and also to protect the environment.

“There were incidents that tourists and residents step on broken bottles,” she said.
Reduce trash

She said the new law also sought to reduce the amount of trash left by people who drank and ate on the beach.

Some tourists and residents had complained of trash being left by tourists on the beach, especially during the stretch of holidays dubbed “Laboracay,” which drew tens of thousands of people to the resort island.

Among the trash left were bottles and cans of beer and other alcoholic beverages, plastic water bottles and plastic bags.