Military cordon around island in Bohol nets no suspect so far 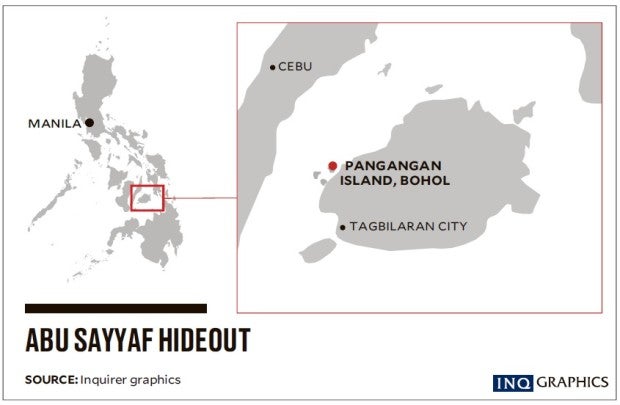 CALAPE, Bohol—A stakeout by soldiers around Pangangan Island, at least 12 kilometers from here, for two remaining members of the Abu Sayyaf group who had slipped into a town in Bohol province, had yielded none of the suspected terrorists.

A police officer, who asked not to be named, said the two terror suspects—identified only as alias Asis and alias Ubayda—who had fled to Pangangan could have slipped through a military cordon.

Government soldiers had surrounded Pangangan after residents reported seeing the two men believed to be remnants of the group that tried to set up base in the Bohol town of Inabanga.

Soldiers searched the five-hectare mangrove forest in the island to look for the fugitives.

On Friday, soldiers used a drone to locate the suspects while helicopters hovered over the island at night.

Navy vessels circled the island as part of the cordon. The two suspects, according to the military, are armed and dangerous.
On Saturday, soldiers were still combing the island amid a celebration of the feast of Our Lady of Fatima.

John Edward (family name withheld), 16, said two strangers had knocked on the door of his house asking for leftover food while he was alone at home on Wednesday in the village of Cahayag in Pangangan.

The teenager said he did not open the door until the strangers left.

“I was terrified because I was alone,” John Edward said. “When people said they could be Abu Sayyaf members, the more I got scared,” he said.

Other children also reported seeing the two men, describing the strangers as thin, wearing tattered shirts with one of the men having difficulty walking.

Residents became more suspicious after seeing the boat believed used by the suspects tied to a mangrove tree on Wednesday. Fisherman Felix Cabreras, 58, said he saw the boat as he prepared to sail and noted its unfamiliar design.

Insp. Cresente Gurrea, chief of the Calape town police force, said the boat had been stolen in the village of Liboron in Calape from owners Cenon and Marcelina Cubelo. The couple had reported losing their boat on May 10 to police.
Gurrea said residents reported seeing two unidentified men aboard the boat.

The second man was carrying a paddle and sack.

The descriptions matched those of two men seen in the village of Candungao in San Isidro town on Monday.

Soldiers had set up checkpoints in several villages in Pangangan. Navy boats patrolled the waters around the island.

On April 10, 11 Abu Sayyaf members, including local resident Joselito Melloria, slipped into Bohol aboard three motorboats in the village of Napo, Inabanga town, on a kidnapping and terror mission.

Only two of the men were left and are now on the run after nine were killed in clashes with government soldiers in Inabanga and Clarin towns.