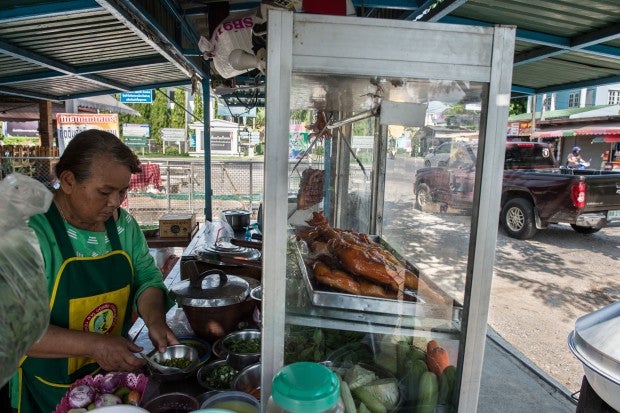 This picture taken on May 4, 2017 shows Mali Pansari, the wife of food vendor Sila Sutharat, preparing garnishes as solar-cooked chicken is displayed on their counter at their eatery in Petchaburi province, south of Bangkok. AFP

PHETCHABURI, Thailand — Sila Sutharat got out of the kitchen but not because he couldn’t stand the heat.

Two hours south of Bangkok, Sutharat has found an ingenious way to offer his customers something a little different by harnessing the power of the sun.

Using a large wall of nearly 1,000 moveable mirrors — a device he designed and built himself — he focuses the sun’s rays onto a row of marinated chickens, sizzling away under the intense heat.

His unusual culinary methods raised a few eyebrows when he first hit upon the idea.

“They said that I’d gone mad, that cooking chicken like this was impossible,” he told Agence France-Presse  (AFP)  next to his stall, the row of sun-drenched chickens behind him too bright to look at for any length of time.

“After a long time passed by, they’d say: ‘Actually, you could do it,’” he said.

That’s because the solar reflector generates intense heat, easily enough to match an oven, with a sunshine-baked chicken taking just 12 minutes to cook through.

For much of the last 20 years, Sila grilled in relative obscurity for a fairly local crowd.

But after videos of his solar-cooker went viral online, people from across Thailand have flocked to his stall in Phetchaburi province.

Sila said the idea came to him in 1997 when he was struck by the heat reflecting off a passing bus.

“I thought, with this heat reflecting from the window from the sun, I could possibly change it into energy,” he said.

Sila said  that compared to a traditional charcoal grill—which he used before his solar epiphany—his meat is more tender and evenly cooked.

And given Thailand’s sweltering tropical climate, the sun is a free, clean and totally sustainable energy source.

“At the time, energy such as petrol and gas was becoming more expensive and suppliers were also running out of wood to sell,” he said.

“I thought if I used solar energy, I could save a lot. And it also decreases pollution.”

Sila and his wife Pansri now cook around 40 chickens—as well as several sides of pork—each day.

“We’ve been eating here for a long time,” said regular patron Thanyarat Kaewpaleuk, who was tucking into lunch with her husband.

“It’s delicious. His chicken is fatty, it’s not burned and doesn’t smell like a charcoal grill, which you can smell on the meat.” —AFP

Read Next
Save Palawan from power woes, Duterte urged
EDITORS' PICK
How to lose a PH genius: Wesley So officially a US citizen
Every Filipino home can now be a smart home with realme TechLife
LTO’s P500-M deal for screws draws scrutiny
Nestlé Philippines’ ‘NESCAFÉ Plan’ bags Grand Anvil at PRSP 56th Anvil Awards
New 3,045 COVID-19 cases push PH total active cases to 40,074
Smart reinforces superiority with best speed and mobile video experience in PH
MOST READ
How to lose a Filipino genius: Wesley So officially a US citizen
Robredo on Sara Duterte leading poll surveys: Why are Filipinos drawn to leadership of this kind?
LTO’s P500-M deal for screws draws scrutiny
Lawyer for red-tagged tribal folk stabbed; laptop, documents taken
Don't miss out on the latest news and information.