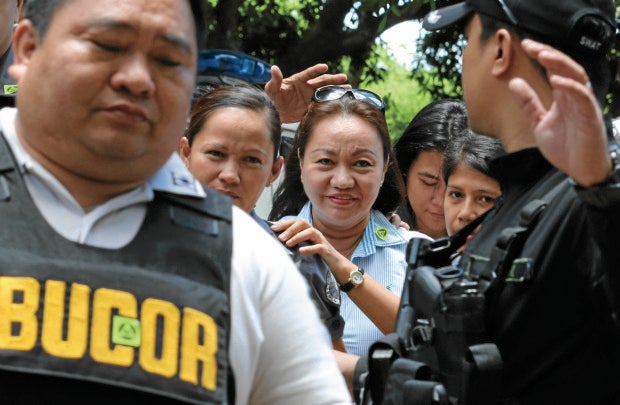 Sen. Francis Escudero on Thursday said he would consider seeking a Senate inquiry into the P10-billion pork barrel scam if the administration would push for an inquiry to target a certain group with the help of Janet Lim-Napoles, alleged brains behind the scam.

He was referring to allies of former President Benigno Aquino III who were rumored to have escaped indictment.

“If the inquiry would not be complete and appear to be directed at one group, we will study the possibility of filing a resolution on this. But if it’s headed toward a complete inquiry, we will just leave the agencies to do their job,” Escudero said at the Kapihan sa Senado forum

Interest in the scam involving the Priority Development Assistance Fund (PDAF) of senators and congressmen has been rekindled by the Duterte administration after Justice Secretary Vitaliano Aguirre II said his department might use Napoles as a key witness in a new inquiry.

Napoles offered to turn herself into a state witness following the appeals court’s decision to nullify her illegal detention conviction.

Her lawyer said Napoles was ready to talk more about lawmakers she had transacted with in misusing their PDAF, including officials and people identified with the Aquino administration.

Escudero said he hoped  that the government would not be like past administrations that went after their predecessors. “They should investigate whether an ally or a foe.”

Aguirre allayed fears of some lawmakers that Napoles’ testimony might be used against members of the Liberal Party, saying the reinvestigation would include senators and congressmen allied with President Duterte.

“If we do that, it would again be selective justice like what happened before,” he said.

Aguirre said he might create a panel composed of state prosecutors of the Department of Justice (DOJ) to lead the reinvestigation of the alleged misuse of PDAF.

Sen. Richard Gordon, chair of the Senate blue ribbon committee, said he was open to having his committee investigate  the pork barrel  scam again  if there were new evidence.

Napoles is facing a plunder case in the Sandiganbayan along with her coaccused—former Senators Juan Ponce Enrile, Jinggoy Estrada and Bong Revilla Jr.

Stephen David, a lawyer for Napoles, said he met with Aguirre on Thursday to explore the possibility of Napoles turning state witness and of being admitted into the witness protection program of the DOJ.

Asked if Napoles would name other government officials who had transactions with her, he said: “Of course. That’s a possibility.”

As to whether he was referring to lawmakers, David said: “There could be higher [public officials]. Whoever were involved should be [investigated].”

Despite the several adverse decisions of the Sandiganbayan and the Supreme Court against Napoles, David maintained that his client was “not the most guilty” in the string of plunder, malversation and graft cases stemming from the alleged misuse of the pork barrel allocations of a number of congressmen and senators.

“She has been tagged as the mastermind or queen of the pork barrel scam. But a private person is not the mastermind (in a) plunder case. Plunder is an offense committed by a public officer,” he argued.

Aguirre disclosed that he had received “raw information” that Napoles’ brother, Reynald “Jojo” Lim, was being held by a certain group to prevent her from testifying.

“He (Lim) was being readied against Napoles,” the secretary told a news briefing.

Asked if her brother would be used to blackmail her, Aguirre said: “It seems like that.”

While admitting a lack of direct proof, David claimed that “former and current high-ranking officials” were out to silence Napoles.

This was the basis for David to seek the transfer of Napoles’ detention to the National Bureau of Investigation custodial center in Manila.

In a letter sent to Aguirre on May 5, David requested the “transfer of confinement by reason of serious death threats.”

Napoles has been held at the Correctional Institute for Women since the Makati City Regional Trial Court sentenced her to up to 40 years imprisonment for the illegal detention of pork barrel scam whistle-blower Benhur Luy.