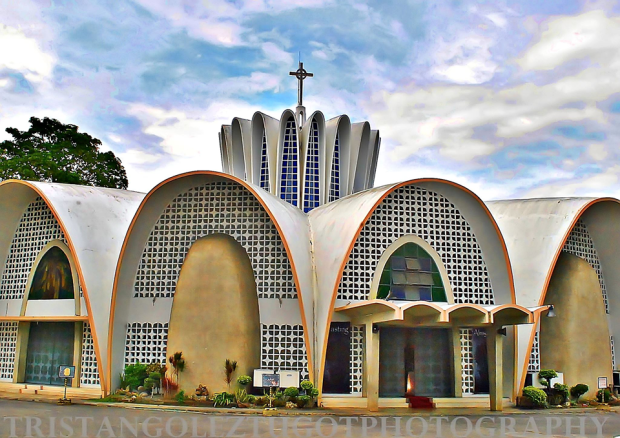 The Queen of Peace Church inside St. John Institute’s in Bacolod City will no longer be a place of worship effective May 31. -Tristan Golez, Contributor

BACOLOD CITY — Those who want to hold their weddings in the iconic Queen of Peace Parish Church here will have to look for another venue.

The Diocese of Bacolod has announced that the church will no longer be a place of worship effective May 31 following its dispute with the board of trustees of St. John’s Institute (SJI), a Chinese school also known as Hua Ming.

With the pullout of the diocese from the school, SJI would no longer be considered a Catholic school when classes begin in June.

The decision was announced on Wednesday by Bacolod Bishop Patricio Buzon following the collapse of negotiations between the Diocese of Bacolod and SJI board of trustees.

In a statement, the SJI said they would first hear the entire statement of Bishop Buzon before giving their clarification.

The SJI board of trustees wanted the Queen of Peace Parish Church to be “de-parished” and reverted back to a chapel to focus on the school.

But the stand was opposed by the bishop because the Queen of Peace Parish can serve both a parish church and a school chapel which it had been doing since the beginning until the last three years.

Buzon also wanted that the parish and school apostolate be administered not by two different groups of priests but by just one religious congregation.

The bishop recalled that the diocese came to the school upon the invitation of the Capitol Subdivision Inc., the donor of the land, which wanted to establish a Chinese apostolate in the area.

To establish a Chinese apostolate means to form the Chinese residents into “a community of Christian faithful stably constituted in a particular church,” under the authority of the diocesan bishop, he said.

To remove the parish from SJI would negate the original intent of the donation, he added.

But Buzon said that since the position of the SJI board of trustees was “non-negotiable,” they decided to pull out from the Queen of Peace Parish Church.

In a joint statement, Buzon and Benjamin Lopue Jr., chairman of the SJI board of trustees, said they agreed to pursue a “peaceful disengagement of relationship starting May 31.”

The bishop said he would issue a decree that would remove the present status of the Queen of Peace Parish as an oratory because it ceased to be a parish church and shrine as well as a school chapel.

Since it was under the control of a private group, Buzon said it would be considered a private structure or building.

“This means the Blessed Sacraments will be removed from the church and the celebration of Masses and sacraments will not be allowed in it at any time,” he said.

Because of the pullout, no priest or religious congregation shall be assigned at SJI, he said.

No Masses will be said inside the campus for the duration of an indefinite moratorium subject to the prudent determination of the bishop, Buzon added.

Confirmation and First Communion Masses will be allowed among students upon request but they will be held in a parish church outside of SJI, he said.

Buzon assured the displaced parish community that they would find a new home.

“We guarantee that out Basic Ecclesial Communities will remain intact and their life and programs will continue. The Diocese is likewise not closing its doors on the Chinese apostolate, perhaps, under new circumstances and in a new location./ac