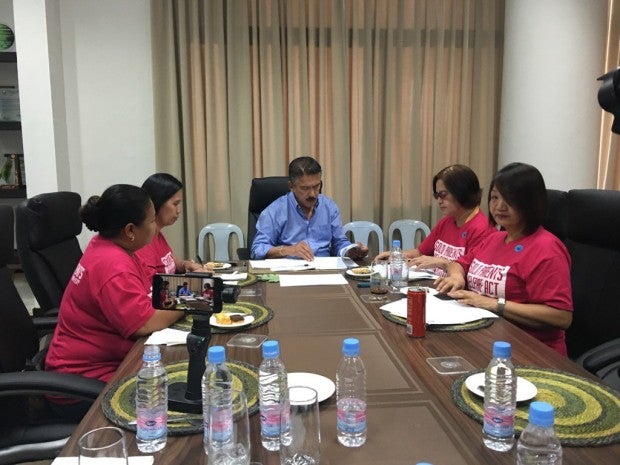 An ethics complaint was filed at the Senate on Wednesday against Senate Majority Leader Vicente  “Tito” Sotto III for his controversial “na-ano” remark during last week’s hearing of the Commission on Appointments (CA).

The  five-page complaint, initiated by eight women from various groups, was lodged before the Senate committee on ethics chaired by Sotto himself.

The eight complainants are Jean Enriquez of the Coalition Against Trafficking in Women-Asia Pacific and the World March of Women (WMW)-Pilipinas, Clarissa Militante of the  WMW, Amparo Miciano Sykioco of the Pambansang Koalisyon ng Kababaihan sa Kanayunan, Judith Pamela Afan Pasimio of Lilak or the Purple Action for Indigenous Womens’ Rights, Judy Ann Chan Miranda of the Partido ng Manggagawa, Ana Maria Nemenzo of the Woman Health Philippines, Josua Mata of the Sentro ng Manggagawa ng Pilipinas, and a certain Myrna Hernandez Jimenez.

In the complaint, the  women specifically cited Sotto’s “na-ano” remark during the confirmation hearing of Social Welfare Secretary Judy Taguiwalo  at the CA last Wednesday, May 3.

“In the street language, when you have children and you are single, ang tawag doon ay na-ano lang,” it quoted the senator as  saying.

The complaint  noted that several people  in the  room  laughed at Sotto’s remarks while Taguiwalo “merely pursed  her lips.”

Sotto’s   comment  about single parents,  the complainants, showed that he viewed  single/solo  mothers as “less -than others; demeaning and disparaging  women in the same position and making them easy  targets of jokes and ridicules.”

“He  epitomizes the segment of the misogynist and macho  sector of society  that considers women, who are without men as less of  value,” the complaint said.

“His language  normalized the patriarchal view  that men  has sexual privilege over women, and trivialized abandonment of responsibility over children. He showed his utter insensitivity and  disregard to the hard work, strong will and determination of mothers, who raise children on their own,” it added.

As a legislator,  Sotto  has also undermined national policies that have underpinned laws such as  The Solo Parents Welfare Act and  the Magna Carta of Women.

It was also “alarming” that not a single member of  the CA “corrected or commented” on Sotto’s remark, the complaint said.

“There is violence and discrimination against women not just through the commission on  act but also through an ommission of an act,” it said.

“When the members of the Committee on appointments remained silent, it is tantamount to tolerating the sexist acts an d remarks of Senator  Sotto toward Judy Taguiwalo.”

“Worse, the comment solicited laughter, making those who did so  as insulting and downgrading as the  one who uttered the insults,”  it further said.

The complaint also cited   other  “ethical infractions” allegedly committed by  Sotto such as his remark  in a noon time show  show in July , 2016 where the latter supposedly shamed a  “sexually assaulted woman” by saying  “kababae mong tao, pa shot-shot ka pa.”

The complainants then sought to punish Sotto  “commensurate to the insult he made to solo mothers, and by implication, to women, all over the Philippines.”

They also wanted the senator to inhibit as chairman of the committee that will handle the case.

Aside from Sotto,  the complainants said other CA members should also be reprimanded for “failing to comment/correct” him during the hearing.

They also wanted the Senate to require all its members,  including their staff, to undergo Gender Sensitivity Training to be facilitated by the  Philippine Commission on Women.

Sotto had already  apologized  to those who were offended  by  his “na-ano” remark.

Sotto on Taguiwalo remarks: If I’m a bad person, then I apologize

Taguiwalo: I accept Sotto apology, but I don’t tolerate misogyny