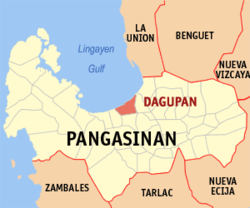 The arrest stemmed from a complaint of Arthur Jose Ang, 35, owner of Golden Go Rapid Gaming Corp. — the STL firm authorized by the Philippine Charity Sweepstakes Office (PCSO) — that another group had been using his company’s name without his consent.

In a radio interview on Wednesday (May 10), one of those arrested claimed they were recruited by Anthony Ang-angco to work in Dagupan City.

Police said those arrested would face charges for violating Article 189 of the Revised Penal Code, which has prohibited any person from selling “his goods [by] giving them the general appearance of goods of another manufacturer or dealer . . .”

Since 2016, PCSO has been expanding its STL operations in a bid to stop other illegal numbers games, like jueteng, and generate more revenue to fund various health and charitable programs in the country, according to its website.