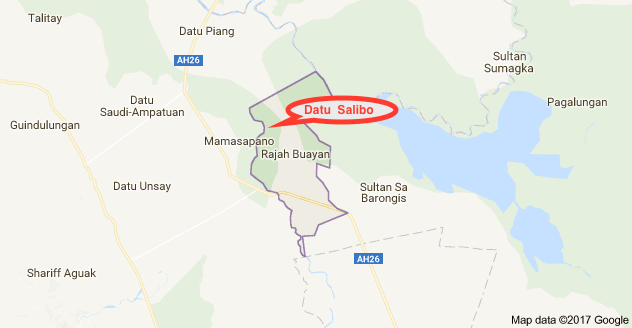 The town of Mamasapano, Datu Salibo and Rajah Buayan in Maguindanao (Google maps)

COTABATO CITY – Four police officers were hurt, three of them seriously, after unidentified men set off a roadside improvised explosive device in Rajah Buayan town in Maguindanao, on Tuesday morning.

Senior Supt. Agustin Tello, Maguindanao police provincial director, said the police, all members of the Rajah Buayan municipal police office, were on board a police patrol car when a bomb, believed to be detonated using a mobile phone, went off at about 10:15 a.m.

The blast site was in front of the town’s public market and a school. No civilian was reported hurt.

Tello believed the bombing was carried out by drug syndicates operating in Rajah Buayan to avenge the death of a big-time drug peddler last week.

He did not discount the involvement of the outlawed Bangsamoro Islamic Freedom Fighters (BIFF), who had been the subject of air and ground assaults by the Philippine Army’s 6th Infantry Division in Datu Salibo town, adjacent to the Rajah Buayan town.

Tello said the wounded cops in Rajah Buayan on Tuesday were to attend a conference on anti-illegal drugs operation and undergo annual physical examination at the Maguindanao police provincial office in Shariff Aguak when the blast occurred.

Tello said the police-driver managed to continue driving following the blast to bring his companions to the Maguindanao provincial hospital in Shariff Aguak town, about 15 kilometers from the blast site.  SFM/rga