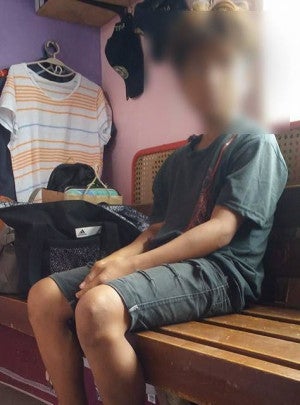 The municipal social welfare office has taken custody of this 14-year-old boy who has confessed to beating to death his elder sister on May 4, 2017, in Banga, Aklan. (Photo contributed to the Inquirer Visayas by Rodnel Aguirre)

ILOILO CITY — A 14-year-old boy has been detained for killing his 22-year-old sister, shocking residents of a remote village in Banga town in Aklan.

“This is probably the first time that something like this has happened in this town, especially that a child is the (assailant),” said Senior Insp. Joey de los Santos, Banga police chief.

The boy, who had quit schooling after reaching Grade 4, repeatedly struck his sister with pieces of wood and bamboo at their house on May 4 during an argument after she refused to let him inside their house.

The victim, the eldest of four siblings, was a rape victim and had suffered depression, De los Santos, citing investigation, said.

The boy initially told their neighbors that he found his sister bleeding at their house.

She was brought to the Dr. Rafael Tumbukon Memorial Hospital in the neighboring capital town of Kalibo where she died from head and other injuries.

The boy later broke down and told investigators that he had repeatedly struck his sister.

“He said he did not intend to kill her,” De los Santos said.

The boy and his sister were the only ones at their house during the killing.

Their mother has died while their father earns a living doing various jobs.

The Municipal Social Welfare and Development Office (MSWDO) has taken custody of the boy as he is a minor and cannot be criminally held liable under Republic Act No. 9344 (Juvenile Justice and Welfare Act of 2006).

De los Santos said the MSWDO would determine the intervention program needed by the boy.  SFM/rga