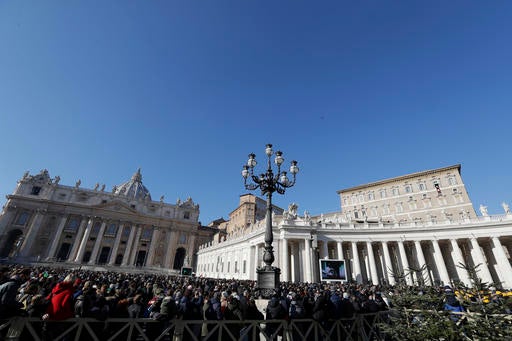 St. Peter square at the Vatican is crowded with faithful as Pope Francis recites the Angelus prayer from the window of his studio, Sunday, Jan. 1, 2017. AP

VATICAN CITY  — The Vatican is celebrating the big-bang theory. That’s not as out of this world as it sounds.

The Vatican Observatory has invited some of the world’s leading scientists and cosmologists to talk black holes, gravitational waves and space-time singularities as it honors a Jesuit cosmologist considered one of the fathers of the idea that the universe began with a gigantic explosion.

The May 9-12 conference honoring Monsignor George Lemaitre is being held at the Vatican Observatory, founded by Pope Leo XIII in 1891 to help correct the notion that the Roman Catholic Church was hostile to science. The perception has persisted in some circles since Galileo’s heresy trial 400 years ago.

The head of the observatory, Brother Guy Consolmagno, says you can believe in both God and the big-bang theory.