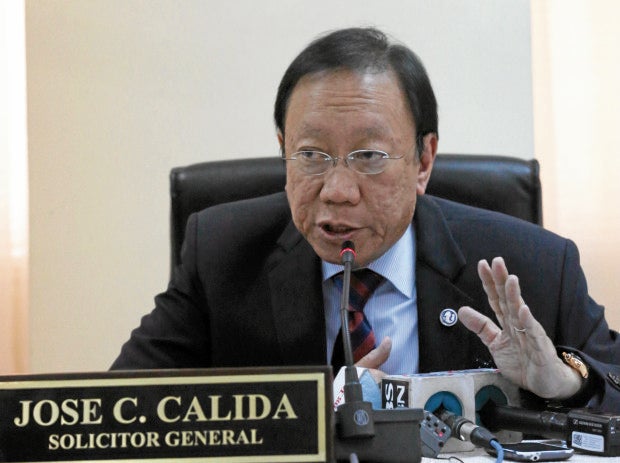 MANILA — Solicitor General Jose Calida’s manifestation in Janet Lim Napoles’ favor was a factor in Napoles’ acquittal in her serious illegal detention case at the Court of Appeals, the court itself said so in its ruling.

As the appellate court noted in its May 5 decision, “the points raised therein were also passed upon in Our decision-making process.”

But Napoles, the alleged pork barrel scam mastermind, may not taste freedom anytime soon, thanks to her non-bailable plunder cases related to the multi-billion-peso pork barrel scam pending, which are pending at the Sandiganbayan.

The Court of Appeals on Friday acquitted Napoles in the case of the illegal detention of scam whistleblower Benhur Luy. It found a lack of evidence to show she masterminded Luy’s detention at a Makati City retreat house from December 2012 to March 2013.

The appeals court’s May 5 decision ordered the “immediate release” of Napoles “unless she is confined for any other lawful cause.”

However, Napoles’s petition for bail was denied in the separate plunder cases of former senator Ramon “Bong” Revilla Jr., Jose “Jinggoy” Estrada,” and Juan Ponce Enrile. This meant she would remain in detention for the time being.

Sandiganbayan Presiding Justice Amparo Cabotaje-Tang, in a text message to reporters, said the commitment orders issued in those cases “constitute the legal bases for her continued detention.”

“The commitment orders of the SB against her stand because they were issued in connection with the cases pending before the SB,” Tang said.

Ombudsman Conchita Carpio Morales had yet to issue a statement, as of Monday afternoon, but during her most recent media briefing on April 25, she said the result of the illegal detention case should have no bearing on the credibility of Luy and the other scam whistleblowers.

“I don’t think it has any bearing on the [Priority Development Assistance Fund] cases. The credibility of Napoles in that detention case does not affect her credibility or the credibility of the witnesses for that matter,” Morales said then.

A few party-list representatives expressed their disapproval of Napoles’s acquittal in the serious illegal detention case.

“The standard of justice under the Duterte administration has gone to the dogs. We are witnessing how big-time plunderers are being acquitted by the courts,” Akbayan Rep. Tomasito Villarin exclaimed in a statement. “Napoles should not hurry and celebrate. The fight against corruption is not yet over!”

Bayan Muna Rep. Carlos Isagani Zarate said he was “gravely dismayed” by the development. He said the people should be “very wary… because as things stand now many of those who have been charged of plundering the people’s coffers are getting off the hook.”

“The people should keep watch and protest these developments,” Zarate said.

On the other hand, Kabayan Rep. Harry Roque said the government “will use Janet Napoles in its on-going war on drugs”—specifically against detained Senator Leila de Lima, who pursued the pork barrel scam charges as Justice secretary under the Aquino administration.

“I also hope the information that Napoles has against Senator de Lima will lead to the conviction of the latter for drug trafficking as otherwise, the acquittal of Napoles may be for naught,” Roque said in a text message.

Yet, he expressed hope that the government would still hold her liable for plunder “if only to serve as an example to others, members of Congress specially, that plunder does not pay.”  SFM