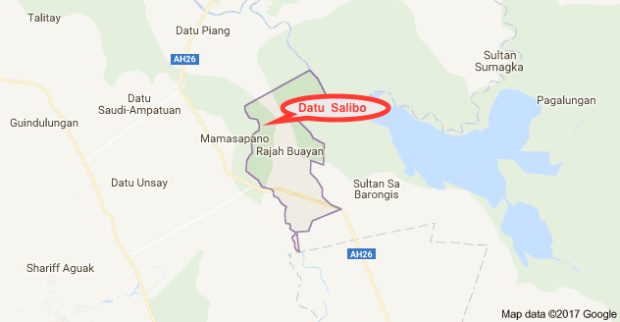 COTABATO CITY — A sub-leader of the outlawed Bangsamoro Islamic Freedom Fighters (BIFF) was killed and four of his companions were injured in a series of skirmishes with government forces in Maguindanao on Sunday, the Army here said.

Killed was Commander Khalid, a nephew of Ismael Abubukar, alias “Commander Bungos,” leader of the BIFF operating in the towns of Shariff Aguak, Datu Saudi Ampatuan, Datu Salibo and Mamasapano, all in Maguindanao’s second district.

The firefight started last Friday when about 100 BIFF men were monitored to be closing in on a military detachment in Barangay Gadong in Datu Salibo.

Government forces used air and artillery strikes in “surgical law enforcement” to drive away the armed men back to the marshland, Encinas said.

The slightly damaged APC was one of the four escorts of government troops sent to reinforce soldiers manning the Barangay Gadong detachment.

Encinas said the same group also set off a roadside bomb in the boundary of Datu Hofer and Datu Abdulla Sangki, both in Maguindanao on Sunday morning “to divert attention from Army offensives in Datu Salibo.”

Datu Salibo is about 15 kilometers from Datu Hofer.

Elements of the 57th Infantry Battalion sent to reinforce soldiers in Barangay Pagatin, Datu Salibo, were ambushed by suspected BIFF, leaving seven soldiers slightly injured after the KM450 military truck was hit by rocket propelled grenades from the BIFF.

All the injured soldiers were safe and getting medical attention at Camp Siongco Hospital in Datu Odin Sinsuat, Maguindanao, according to Encinas.

Abu Misri Mama, speaking for the BIFF, confirmed to Cotabato City radio stations the death of a sub-leader but assured their leader, Ali Abubakar alias “Commander Bungos,” was unharmed.