Lani Mercado sorry for tweeting about ‘death’ of Imelda Marcos 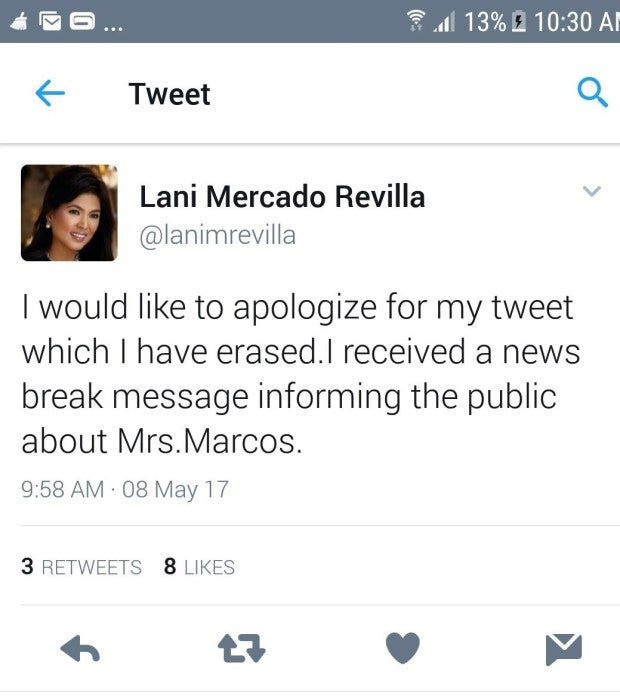 On Twitter, Revilla first tweeted her condolences to the family of the widow of the dictator Ferdinand Marcos.

“Our condolences to the Marcos family. It was a pleasure and a privilege to work with Cong. Imelda Romualdez Marcos,” tweeted Revilla, the former Cavite congresswoman and wife of former senator Ramon Revilla Jr., who is detained for plunder over a pork barrel scam.

Revilla later tweeted her apologies because the 87-year-old Imelda Marcos was alive.

“I would like to apologize for my tweet which I have erased. I received a news break message informing the public about Mrs. Marcos,” Revilla said.

These tweets have since been taken down.

The husband of Imelda cemented his two-decade rule when he declared martial law in 1972. The military turned on him in 1986 and led a peaceful people uprising that toppled the dictatorship.

Imelda, who was known for her lavish lifestyle as First Lady, faces 10 criminal charges of graft before the Sandiganbayan Fifth Division for allegedly having pecuniary interests in various foundations set up by her and her husband allegedly to accumulate ill-gotten wealth.

Imelda has faced graft charges since 1991 for alleged offenses when she was a member of the Interim Batasang Pambansa and as Minister for Human Settlements. She is on trial.

Imelda Marcos allowed to travel to Singapore despite graft cases