Imelda Marcos allowed to travel to Singapore despite graft cases 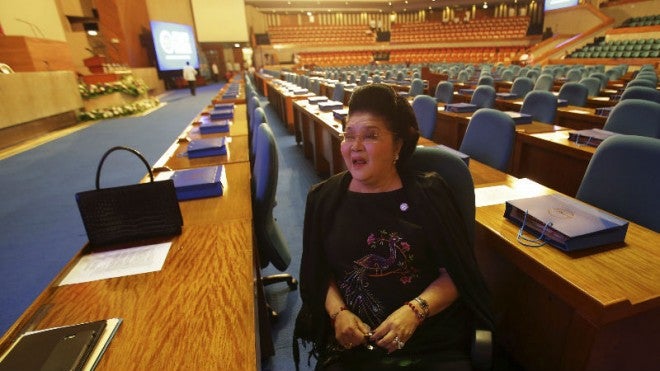 The Sandiganbayan on Friday allowed former First Lady, now Ilocos Norte Rep. Imelda Marcos to travel to Singapore despite graft charges filed against her and which have dragged on for almost two decades.

In a resolution, the antigraft court Fifth Division allowed Marcos to travel to Singapore from Oct. 26 to Nov. 9.

Mrs. Marcos, known for her lavish lifestyle as First Lady, faces 10 criminal charges of graft for allegedly having pecuniary interests in various foundations set up by her and her husband, the late former President Ferdinand Marcos, to accumulate ill-gotten wealth.

Some of these foundations have Swiss bank accounts, where the Marcos couple allegedly stowed away millions of stolen taxpayers’ money.

Rep. Marcos was charged for graft as early as 1991 for the alleged offenses when she was a member of the Interim Batasan Pambansa and Minister for Human Settlements.

After two decades of martial rule, Imelda’s husband and the dictator Marcos was ousted in a peaceful people’s uprising.