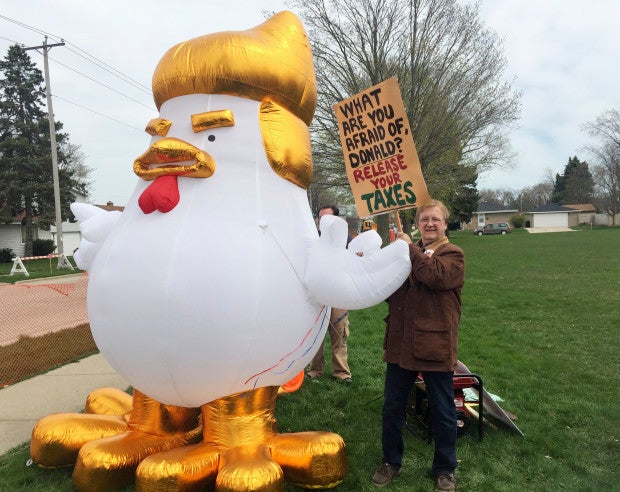 Retired high school teacher Tom Gilding holds a sign as he stands next to an inflated chicken made to resemble President Donald Trump on Tuesday, April 18, 2017, during a protest ahead of Trump’s visit to Snap-On Inc. in Kenosha, Wisconsin. In Colorado, a high school Spanish teacher is under investigation for reportedly allowing students to hit a piñata with a picture of Trump on it. AP

JOHNSTOWN, Colorado, United States — School officials in Colorado are investigating allegations that a high school Spanish teacher allowed students to hit a piñata with a picture of President Donald Trump on it during a Cinco de Mayo celebration.

The station says the teacher is on paid leave. The teacher’s name hasn’t been released.

Lesley Hollywood, the parent of a Roosevelt student, says she was offended when saw a video of the piñata on the social media app Snapchat.

Hollywood says she didn’t vote for Trump but the piñata was disrespectful. CBB/rga