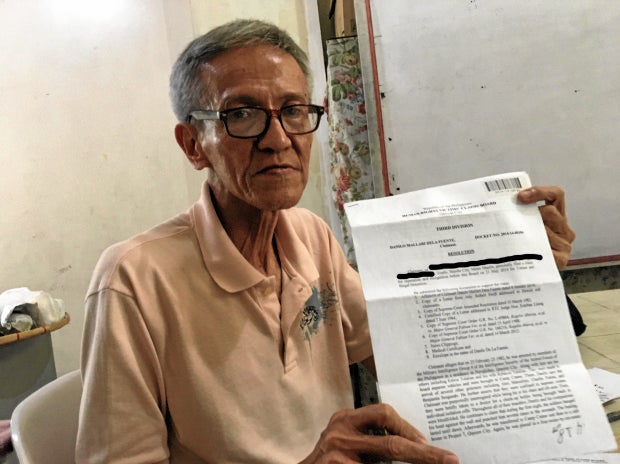 RECOGNITION OF TORTURE Danilo de la Fuente holds a document from the Human Rights Victims’ Claims Board recognizing that he was torturedwhile in military custody in 1982 during the Marcos regime, entitling him to a compensation of P100,000 that he will receive today.—VINCE NONATO

There’s now more official proof that Danilo de la Fuente and thousands of others were victims of human rights violations under the Marcos dictatorship.

De la Fuente showed the Inquirer a document, which comes in the form of a ruling only three pages long.

But those three pages recognize that in February 1982, he was hit against the wall and punched in the chest and the stomach while in the custody of the Intelligence Service of the Armed Forces of the Philippines (ISAFP).

De la Fuente is one of some 4,000 people who compose the first batch of victims who will receive today compensation—only partial for now—for violations of their rights at the hands of martial law authorities.

The Human Rights Victims’ Claims Board (HRVCB) has approved their claims, a year before its mandate lapses on May 12, 2018.

For De la Fuente, who participated in the successful class suit against the dictator Fedinand Marcos in Hawaii, it’s not the P100,000 he will receive that makes the long wait worth it.

“It’s principally about the recognition. We did not think, even back in Hawaii, that we would receive the compensation or damages or claims,” said De la Fuente, spokesperson for the Samahan ng Ex-Detainees Laban sa Detensyon at Aresto (Selda), which counts as members martial law survivors and reparation claimants.

A fellow class suit plaintiff and Selda member, Trinidad Herrera-Repuno who was electrocuted in the breasts and fingers to make her admit to being a communist, said the compensation was meant for “justice for what has been done to the Filipino people.”

But “there is no closure yet,” said executive director Zenaida Mique of Claimants 1081, another group of Marcos victims seeking compensation.

Mique cited the need to educate the public about the horrors of Marcos rule, as his family has staged a successful political comeback. (Former first lady Imelda Marcos is a congresswoman of Ilocos Norte and her daughter Imee is governor of the province. Former Sen. Ferdinand Marcos Jr. narrowly lost the vice presidency to Leni Robredo. The Marcoses are considered allies of President Duterte.)

“Someone should be held accountable for the grave sins they have committed against the people,” De la Fuente said.

“Because the culture of impunity has prevailed. Up to now, there’s nothing. The Marcoses up to now, they’re still grinning like dogs,” he added.

The 4,000 preliminarily approved claims represent only 5 percent of 75,730 claims received by the HRVCB during the submission period.

As of mid-April, more than 32,000 of the claims have been adjudicated, said information officer Beverly Castillo.

Cagayan Valley and Ilocos Region, the so-called Solid North that has traditionally been a major source of support for the Marcoses, are home to 182 and 109 claimants, respectively.

A total of 2,661 of the approved claimants are “conclusively presumed victims,” while the rest are new applicants, according to HRVCB.

Among the conclusively presumed victims were those who were killed by authorities or had disappeared, including Kalinga tribal leader Macli-ing Dulag (who led the opposition to the construction of Chico Dam) and students Norberto Acebedo Jr., Emmanuel Lazo and Archimedes Trajano (who died for questioning Marcos daughter Imee’s capability to lead the youth).

Many of the conclusively presumed victims joined the Hawaii class suit. But only about 3,500 of the roughly 9,000 class suit plaintiffs filed claims at the HRVCB, according to Castillo.

Approved claimant Milagros Legaspi said she had tried to inform some of the litigants she knew but they had “no trust” in the bureaucracy.

She is claiming the award not only for herself, but also on behalf of her father, Domingo Lumabi, an Isabela native who died in the early 2000s without receiving the reparation.

Legaspi maintained that the military was particularly feared in Isabela province, narrating a tale of how farmers were routinely harassed under the suspicion that they were supplying food to communist guerrillas.

Under the HRVCB’s system, claimants are assigned points depending on the severity of their experiences. Legaspi was awarded a grade of 9 for the torture and sexual abuse she suffered at the hands of soldiers at Fort Bonifacio after she was accused of being a rebel of another name. Lumabi got 7 points.

Republic Act No. 10368 provides that victims who died or disappeared will be allotted the maximum of 10 points. Victims of torture, rape or sexual abuse are to be given 6 to 9 points, while detainees will get 3 to 5 points.

Each point is equivalent to a partial compensation of P12,500, Castillo said. Presidential spokesperson Ernesto Abella said in a March 28 briefing that a total of 23,567 points had been allocated to the 4,000 claimants.

HRVCB Chair Lina Sarmiento said “there were some” objections to some of the approved claimants. At the same time, other claimants have appealed the award to receive a larger payout. The HRVCB could not give a precise number of objections and appeals as of press time.

These claimants may have to wait a while longer before finally getting their compensation. “We need to resolve these appeals and opposition before subject claimants can be included on the final list of recipients,” Sarmiento said.

De la Fuente was not satisfied with the eight points he was allotted. The former labor leader noted that the torture he suffered did not end with his jailers electrocuting him, banging his head against the wall, playing Russian roulette on him and kicking him around like a football.

There was also the overwhelming fear he felt in detention. While blindfolded for 79 hours, he could hear a fellow inmate screaming, later learning that his feet were singed with an acetylene torch.

“I thought my comrade was going to be killed. Is that not a form of mental torture? That was really intense, the feeling that you don’t know where you will end up,” De la Fuente said.

But as Selda spokesperson, he said he chose to focus instead on helping other claimants, who felt the award they would receive would not be enough.

He recounted the story of an appellant, whom he did not identify, who was shot during his arrest. The HRVCB, he said, considered the shooting only as physical injury, which qualified him to just one or two points.

“He was arrested. He was shot. Isn’t that a form of torture? Even I am confused,” De la Fuente said. “What’s important in his appeal is not the money. It’s about the principle of the basis of the decision.”

If it were up to him, every validated claimant should receive an equal share of the P10 billion allotted to the HRVCB from the dictator’s secret bank deposits in Switzerland, part of the ill-gotten wealth of the Marcoses that the Philippine government has recovered.

Compounding the workload problem of the HRVCB is the need to weed out ineligible applicants, which Selda estimated to be 10 percent of the claimants.

“There are victims who do not know how to narrate their stories. So we wonder, ‘You’re the victim and you don’t even know what happened to you?’” Repuno said.

The claimants, however, somewhat found an ally in the same person they also criticized for helping the Marcoses stage their political comeback: President Duterte. They credit his help for pushing the HRVCB to finally release the compensation.

“He really helped when it comes to speeding up [the claims process],” De la Fuente said. He recalled Mr. Duterte’s directive to the HRVCB in front of the claimants: “Executive Secretary Salvador Medialdea will take care of you.”

While cautiously noting Mr. Duterte’s role in the Marcoses’ bid for “political rehabilitation,” De la Fuente noted the negligence of previous administrations and even the help to the Marcoses extended by President Fidel Ramos, who allowed the dictator’s remains to be flown back from Hawaii.

“Our position does not stop at the burial [of Marcos‘ remains at Libingan ng mga Bayani in Taguig last year at the behest of Mr. Duterte]. We criticize the President, but the fight is not over,” the Selda spokesperson said. “There’s no closure yet. They [the Marcoses] have to be held accountable and stopped from returning to Malacañang.”