Lacson raises issue of ‘personality disorder’ in vote vs Lopez 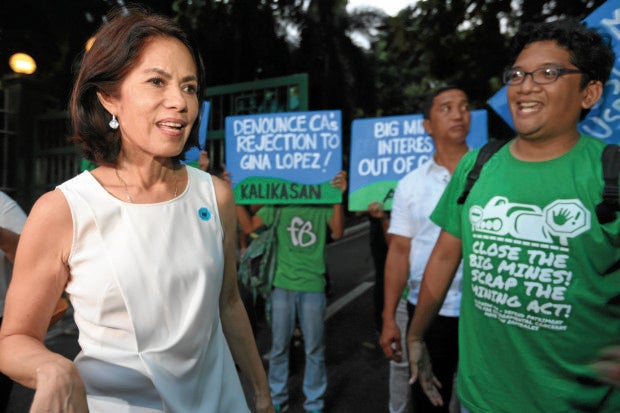 Sen. Panfilo Lacson on Sunday further explained his vote to reject the confirmation of Regina “Gina” Lopez as secretary of the Department of Environment and Natural Resources amid President Rodrigo Duterte’s allegation that “lobby money” was behind the Commission on Appointments’ (CA) rejection.

In a radio interview, Lacson cited a 1975 Supreme Court document involving a habeas corpus petition filed by a minor Lopez and Ananda Marga Pracaraka Samgha in the Philippines Inc., a socioreligious organization, against her own mother. The case mentioned Lopez’ confinement at the Dare Foundation, a drug rehabilitation facility, for being accused of violating the Dangerous Drugs Act.

The SC document also showed that Lopez’ mother Conchita voluntarily submitted her to a Pasig Circuit Criminal Court in 1974 to have her committed to the rehabilitation facility due to alleged drug addiction “for the purpose of determining whether she is still a drug dependent or not and/or she is suffering from personality disorder or not.”

Lopez’ habeas corpus petition, however, was dismissed when she disappeared from Dare Foundation moments before she was about to be examined by doctors and expert psychiatrists. It was also dismissed for being moot and academic as Lopez had already reached the legal age.

Lacson said he did not raise the issue during the hearing because of its sensitive and personal nature, but added that President Duterte’s “lobby money talks” remark, which he described as “sweeping assault” against the CA’s integrity, prompted him to explain his vote against Lopez.

In a speech last Thursday, Duterte said: “Sayang si Gina. I really like her passion. But you know how it is. This is democracy and lobby money talks. I do not control everything. I am the head of the executive department, the President. Congress is controlled by the Senate President and the Speaker, the lower house and the upper house.”

Voting 16-8 through secret balloting, the CA on Wednesday rejected with finality the appointment of Lopez as secretary of the Department of Environment and Natural Resources. Her 10-month stint was marked by her strong anti-mining stance, particularly her controversial order to close mining firms and contracts.

The senator likewise noted the former environment secretary did not know what a critical watershed means, when asked during a CA hearing. Lacson said “it was not for Ms. Lopez to declare what is against the law.”

READ: ‘Authoritarian tendencies’ a reason behind Lacson’s vote vs Lopez