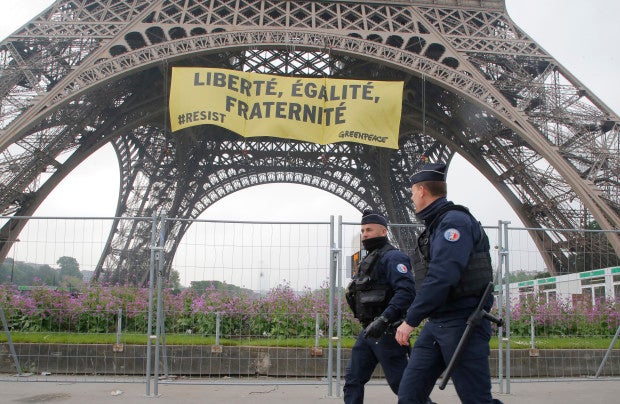 Greenpeace activists on Friday pulled off a daring stunt in central Paris, attaching a giant banner to the Eiffel Tower and leaving police to admit security “flaws” at a time when terror fears remain high.

Though security has been increased around French tourism sites, the activists managed to hang from ropes and attach a 30-meter (100-foot) long banner reading “Liberty, Equality, Fraternity” and “#resist” in protest at the program of far-right presidential candidate Marine Le Pen.

The activists hung the banner from an arch connecting two legs of the iconic 324-meter (1,063-foot) “Iron Lady”, a symbol of Paris.

Twelve people were arrested over the stunt in which a safety net was also damaged.

The incident took place two days before France votes in a divisive second round of the presidential election.

The incident revealed “flaws in the monument’s security programme,” Paris police said in a statement.

France is on high alert after a string of jihadist attacks since January 2015 that have killed over 230 people.

Also Friday, a suspected radical was arrested near a military airbase near Paris, sources close to the case said.

Investigators found guns hidden in bushes near the facility and a pledge to the Islamic State group and several of its flags in his car, which was also parked nearby, they said.

“It is unacceptable that a monument like the Eiffel Tower, the emblem of Paris for Parisians and for all French people, should be used for political ends,” the mayor’s office said in a joint statement with the police.

Police boosted patrols around the Eiffel Tower along with dog teams after the protest.

Security numbers will also be boosted at the tower’s supervision centre and video monitoring will be reviewed.

Paris officials announced in February plans to protect visitors by erecting bulletproof glass walls at the northern and southern ends of the monument area.

The glass walls are intended to prevent individuals or vehicles from breaching the site.

The Eiffel Tower is visited by six million people each year, making it the world’s most visited paying monument.

Greenpeace France head Jean-Francois Julliard told reporters the protest was intended as “a warning against Marine Le Pen’s programme and the dangers it poses for NGOs and others.”

“Liberty, equality, fraternity: it is vital to defend these values which are particularly threatened by the National Front,” Julliard said, referring to Le Pen’s party.

Julliard said Greenpeace was concerned about the “resurgence of nationalism” around the world, citing Turkey and Hungary as examples of countries where the right to protest had been curtailed.

Defending basic rights “is critical to continuing our environmental struggle,” he added.

In 2013, a Greenpeace activist spent hours suspended from the tower to protest against  the imprisonment of 30 Russian militants after an operation on an oil platform.

The Eiffel Tower received around seven million visitors in 2015. That figure dropped to six million last year as some tourists stayed away following terror attacks in France which have left 239 people dead since early 2015.