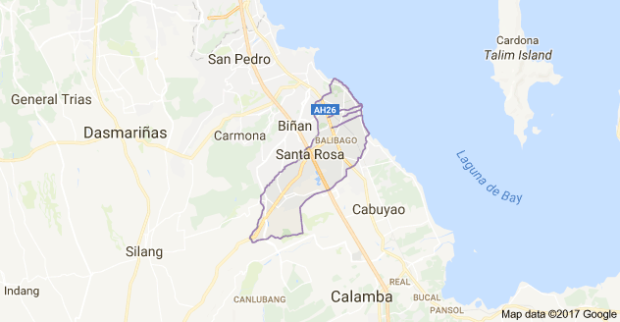 SAN PEDRO CITY — A policeman was shot dead by a fellow officer after he intervened in an anti-drug operation in Sta. Rosa City in Laguna province, police said Thursday.

Supt. Joel Estaris, the Sta. Rosa city police chief, said in a phone interview that Police Officer 3 Harry Panis Cabacang, who was assigned at the Laguna Provincial Public Safety Company, was off duty when he intervened in the operation of a team of anti-drug policemen before 10 p.m. Wednesday in Barangay (village) Pulo Sta. Cruz. The city police targeted a certain “Utoy” and three other drug suspects from whom they recovered 17 sachets of suspected “shabu” (metampethamine hydrochloride).

However, as they were wrapping up the operation, a motorcycle-riding man, who turned out to be Cabacang, drove by and intervened in the operation. He was in civilian clothes.

“(Cabacang) was shouting invectives at my policemen. He also did not introduce himself,” Estaris said.

One of the city policemen, PO1 Glibecerio Cruz, stepped up and introduced himself as an officer. But Cabacang attempted to draw his gun, prompting Cruz to shoot him in defense.

Cabacang was hit in the face and died in the hospital.

Estaris said it was only later that they learned that Cabacang was a policeman.

Estaris did not believe Cabacang was in any way related to the arrested drug suspects, but described him as rather “drunk” during that time.

Prior to the shooting, Estaris said village officials that afternoon had gone to Cabacang’s home in the village after receiving reports that he was beating his girlfriend.

Cabacang and his girlfriend reportedly had a spat and that he had been drinking since Wednesday afternoon.  SFM/rga