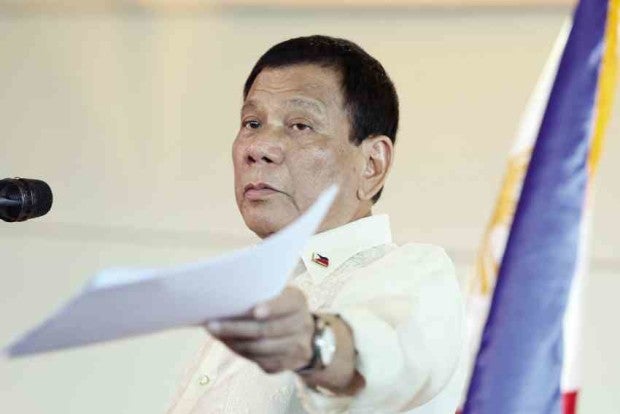 The House of Representatives will deliberate first on the impeachment complaint against President Duterte while critics of Vice President Leni Robredo are still looking for a congressman to endorse their own impeachment bid.

Majority Leader Rodolfo Fariñas and House justice committee chair Reynaldo Umali agreed to finish deliberations on the Duterte complaint before the current session adjourns at the end of the month.

“We agreed to give it priority. It will be referred to my committee soonest,” Umali said, adding they may even call marathon sessions if needed.

But Fariñas said the Duterte complaint would not be rushed and would be given the same treatment as last year’s congressional inquiry on Sen. Leila de Lima’s alleged drug links.

“It took us 10 hours just to tackle [the De Lima controversy]. This will be given the same treatment, just to [do] away with it or get it moving, as the case may be,” Fariñas said.

But Fariñas reiterated his belief that the complaint filed by Magdalo Rep. Gary Alejano in March would not gain any traction in the 292-seat House.

“There’s only one of him,” Fariñas said. “I read reports that even the Liberal Party will not support the complaint.”

The same situation can be said of the two impeachment complaints against Robredo.

The group of lawyers even had to apologize to Nograles who accused them of misrepresentation after they placed his name in their complaint without his consent.

Impeach Leni Movement spokesperson Bruce Rivera said his colleague Trixie Cruz-Angeles affixed Nograles’ name in the complaint “so if he decides to be one of the endorsers, it will be easier.”

“There was never any intention to misrepresent. In fact, the impeachment complaint submitted to other members of the House did not include his name anymore,” he said.

“We apologize to Congressman Jericho Nograles for this unfortunate situation,” Rivera said, adding that Alvarez was also provided a copy of the complaint.

Nograles later accepted the lawyers’ apology which, he said, proves he had no prior knowledge of the complaint.

At the same time, Robredo’s legal adviser Ibarra Gutierrez, dismissed as “lies” the allegations against the Robredo.

“The supposed grounds against VP Leni are all lies,” Gutierrez said, stressing that telling the truth is not a betrayal of public trust but a “fulfillment of her task.”

“If there is no congressman who would want to sponsor their impeachment complaint, it only shows that [the complaint] is weak and baseless,” he stressed.

“As the President says, any impeachment filed against those who have won votes should not be pursued because it will only derail whatever legislative agenda the Congress has,” Panelo said.