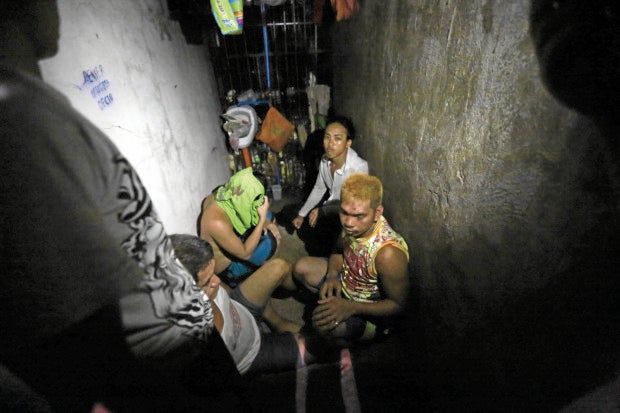 A secret room where detainees are held at Manila Police Station 1 in Tondo. RAFFY LERMA/INQUIRER

Lawmakers have called for a congressional investigation into the secret cells allegedly maintained by the Philippine National Police as part of the Duterte administration’s war against illegal drugs.

Both lawmakers emphasized it was a violation of the Anti-Torture Act of 2009.

Baguilat said that the Constitution itself prohibits secret detention places and placing suspects under solitary confinement, keeping them incommunicado, or other similar forms of detention.

“The conflicting statements of the PNP leadership, especially the statements of Director General [Ronald] dela Rosa, indicate either an ignorance of or disrespect for the law, both of which are inexcusable for the chief protector of the Filipino people,” Baguilat said.

For his part, Rocamora reiterated the “condemnation and anger” triggered by the discovery of the secret cell.

“However, beyond expressions of disgust we have to move forward and cleanse our ranks in the police force. Central to this mission is conducting an exhaustive investigation into practices of torture, illegal arrests and secret detention facilities which should have been relegated to history,” Rocamora said.

“If left unchecked, these violations of human rights can lead to a culture of impunity and erosion of public trust in our institutions,” he said.

Acting on a tip, the CHR raided the Raxabago police station in Tondo last week, making the appalling discovery of a dozen men and women crammed into a tiny room where police detained them on allegations that they were using or selling prohibited drugs.